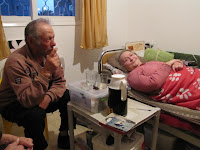 Boris and Zinaida are Holocaust Survivors.

They were just children in the Ukraine during World War II when the extermination of the Jewish people was high on Hitler's agenda.  But they survived.

Boris escaped the persecution by fleeing to Kazakhstan.  Zinaida survived by hiding out in the forest with other children.  They would dodge Nazi bullets and get frostbite in their hands and feet during the freezing winters.  Eventually, an elderly Christian lady took Zinaida in saying, "I'm not afraid if they kill me for this as I'm already old and I have lived a good life." 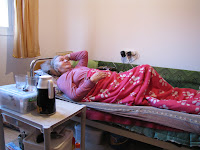 When Zinaida was older, she fell and broke her leg. Because she was Jewish, the staff at the hospital did not attend to her correctly, causing long term damage. Today Zinaida is bedridden.  Because her leg was not set correctly all those many years ago, sadly she can no longer move around.  She also suffers pain in her hands and feet because of the frostbite she experienced over several winters hiding in the forest.

Boris and Zinaida fled to Israel to escape more Jewish persecution in Europe, leaving
everything behind.  They are both elderly now, and Boris is full time carer to his bedridden wife.  Their pension is not sufficient to meet their expenses, so every morning in the summer, Boris goes to the clean the local beach, walking miles to pick up rubbish that others have left behind so he can supplement their income just a little.  Even with this, they do not have enough to money to pay for their bills as well as buy all the medication they need, so they decided to try a cheaper way to stay healthy by drinking herbal teas and taking fresh garlic every day.

It is obvious to see this couple are still deeply in love.  In the words of Boris, "When I first met Zinaida, I asked her to marry me within two weeks.  She was so beautiful I was worried someone else would ask her first!'  This year, this elderly couple celebrated their 50th Wedding Anniversary - another testimony to 'survival' that they are determined to share with any who will take the time to visit and listen to their story. 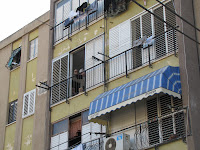 Helping Hand Coalition visit Boris and Zinaida regularly, taking food coupons, blankets and helping with any other practical needs that they can.  Boris and Zinaida are very grateful for these gifts and donations, but mostly they look forward to spending time with the friendly and caring staff of HHC, when they come into their small apartment to talk and listen and drink tea together.  It's this kind of lifeline that makes the difference between those who survive, and those who don't.

You can have an impact of the lives of people like Boris and Zinaida by supporting Home Visits and Care Packages.  There are many other Survivors who need visits and HHC is reaching as many of them as they can.  Will you partner with us so they can reach more?  Donate now!