Rumours of Wars? Let Us Pray!

We saw this very personal response after a visit to Israel, by Colin Dye, Senior Minister and leader of Kensington Temple/London City Church, Nottinghill Gate, London and thought you might enjoy it too.
Colin Dye looks with fresh eyes at Israel, God and the Bible and challenges us to do the same.

Growing rumours of war between Israel and Iran: Pray for the Peace of Jerusalem!
By Colin Dye 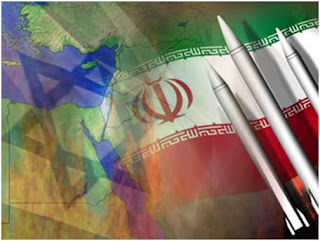 Every day in the news we hear of violence and atrocities in the land of Israel. In modern times this conflict has been ongoing, beginning with the return of Jews to their homeland at the end of the 19th century. It has continued during the British rule in the 1920s, the division of the nation into separate Jewish and Palestinian states in 1948 and the Six-day war of 1967. As rumours are growing that Israel is about to launch an attack on Iran, I invite you to pray for the peace of Jerusalem.
Isaiah 62:2-7
"...I have set watch-men on your walls, 0 Jerusalem; they shall never hold their peace day or night. You who make mention of the name of the Lord, do not keep silent, and give him no rest till He establishes and till He makes Jerusalem a praise in the earth”.
A Chastening
When I visited Israel the Lord began to chasten me in my spirit. This chastening has been a pleasant experience though. The Bible says, ‘Don’t be like a mule or a horse that needs the bit and bridle to pull it into subjection.’ He wants to guide us with his eye. The Holy Spirit was so gentle with me, so revelatory and so repetitive; there was no mistaking what he was saying to me, and I confess that in the last ten years I have sinned before the Lord and before his people. My sin has been one of neglect. When we read about watchmen on the walls of Jerusalem, we think first of our own Jerusalem. What is our Jerusalem? London, but we have no right to claim the blessings for our ‘Jerusalem’ until we’ve understood God’s purposes for His Jerusalem. This is what the Holy Spirit chastened me about, and I have responded and repented...
Read the full article here
Read more >>
Read more >>

Colin Dye's prayer:  "Father in the name of Jesus, I come before you and I ask your forgiveness for my neglect of something so clearly revealed in scripture and in my enthusiasm to reach the gentile blessings I have at times neglected your heart for Israel. I thank you Lord for your freedom, for your cleansing and I thank you for the release of your blessing through repentance and restoration in Jesus’ name."
Email Post
Labels: Christian Isaiah 62 Jewish roots Middle East Peace in Middle East Prayer watchmen Your People My People