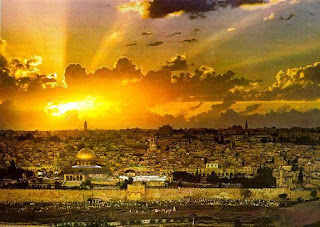 In June 1967, a divided Jerusalem was reunited and came under Jewish control for the first time since the destruction of the Temple by the Romans in 70 AD. The reunification is celebrated each year on the Hebrew date Iyar 28 (20th May 2012). Known as Jerusalem Day, the event is marked with joy and celebration. The city streets burst full of young people waving flags, singing and dancing.


Is there another city that has seen so many wars and been attacked by so many nations throughout history? Jerusalem, the place God chose to make his dwelling place is the most contested piece of real estate in the world! Jerusalem means 'city of peace' in the Hebrew language, but historically, peace was not often found within its walls. There is no doubt though, that according to the Bible, this ancient city holds a very special place in God's heart and his eternal plans for her are solid.

The LORD will roar from Zion and thunder from Jerusalem: the earth and the heavens will tremble. But the LORD will be a refuge for his people, a stronghold for the people of Israel. "Then you will know that I, the LORD your God, dwell in Zion, my holy hill. Jerusalem will be holy; never again will foreigners invade her."   Joel 3:16-18

Jesus also wept over this beautiful city. His heart was broken over their failure to know him...


"Jerusalem, Jerusalem, you who kill the prophets and stone those sent to you, how often I have longed to gather your children together, as a hen gathers her chicks under her wings, and you were not willing..."  Matthew 23:37

But he was also aware that one day the residents of Jerusalem would welcome him back - they would see the one they had rejected, for who he really is.

Today there are already hundreds of believers: Jewish, Arab and from every nation, echoing this cry - 'Baruch haba b'shem Adonai' - blessed is he who comes in the name of the Lord - let's join with them in prayer for this city and her destiny.


Pray for the peace of Jerusalem:

“May those who love you be secure.

May there be peace within your walls

and security within your citadels.”

Baruch HaBa (Blessed is he who comes) by Paul Wilbur, recorded live in Jerusalem.


CLICK to watch a Beautiful Arial Journey over Jerusalem in HD