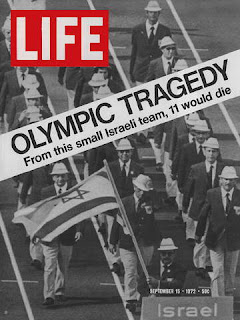 In the early hours of the morning on September 5th, 1972, Yosef Gutfreund, an Israeli Olympic coach, was woken by the sound of scratching at the door of his Munich Olympic village apartment. On investigating, he found masked men with guns attempting to enter the apartment. Yosef, a wrestling referee, threw his body against the door in a vain attempt to stop them entering and shouted warnings to his room-mates.

A bloody struggle ensued, resulting in two of the Israeli athletes being shot dead and the remaining nine being bound and held in one of the rooms. The eight intruders armed with sub-machine guns, pistols and hand grenades, were members of a terrorist group called Black September. They demanded the release of over 200 Palestinian prisoners in return for their Israeli hostages.  Long negotiations and an unsuccessful rescue attempt by the German police, resulted in the terrorists murdering  all of the nine hostages. (Watch the full story in the video at the end of the article)

The incident, informally named the Munich Massacre, occurred during the 1972 summer Olympics, held in Germany. It was one of the lowest points in Olympic history. This year will be the 40th anniversary of that tragedy and one of the widows is urging the International Olympic Committee to agree to a one minute silence at the 2012 games in memory of her husband and his colleagues, to mark the anniversary.

Seven athletes who were on the 1972 team, now in their 60s, were taken back to Munich for a TV documentary that is being made about what happened. Dan Alon, who competed in fencing, said that he had nothing against the German people. "I have only one thing to blame, it's the terrorists, unfortunately," he said. "We hope that one day, it will be the end of terror around the world."

The British ambassador to Israel, Matthew Gould promised this year's Olympians
that their security was paramount. "We are doing everything possible to keep you safe," he said. "Forty years on, the lessons from Munich have not been forgotten."

Israel has taken part in the Olympics since 1952, when the Olympic Committee of Israel was founded. The first Israeli Olympic medal was a silver won for Judo by female sportswoman, Yael Arad in 1992.  Israel went for their first and only gold in 2004, when Gal Fridman, took the winning medal in Athens for windsurfing. They have been even more successful in the Paralympic Games, winning a total of 113 Gold medals.

Israeli swimmer Gal Nevo secured his place in the 2012 London Summer Olympics team after finishing the 200 metre individual medley at the World Championships in Shanghai, with a time of  1:59.98. This qualified him for both the semifinals of the championships and the 2012 Olympics, for which he had to meet the criterion of 2:00.17.
Gal Nevo will join teammate Nimrod Shapira Bar-Or, who was the first on the Israeli team to qualify for the London Olympics.
We pray for God's protection and blessing over the 2012 London Olympics and hope that these games will be an opportunity for the world to come together in peace to celebrate the best it has to offer in the world of sports. The Olympic vision is that individuals, not countries, contend against each other in sport, through peaceful competition without the burden of politics, religion or racism.
Let the games begin!


Watch the Full Story of the Munich Massacre