Helping Hand Coalition is an organisation run by Israeli believers in Israel.  They provide much needed support and assistance to hundreds of struggling people across the country, with a particular emphasis on helping Holocaust Survivors.  As well as providing essential practical support, HHC goes the extra mile and also attempts to help bring relief to the deep wounds that the Holocaust burned into many hearts.

In April, a special meeting took place in Nazareth Ilit between a group of German high school students and Holocaust survivors living in Israel, coordinated by a partnership with HHC.  During the meeting, the survivors shared memories of their experiences and the difficulties they have had in surviving the Holocaust.  After this the high school students asked them many questions.

A particularly moving moment occurred when Harald Eckert (Chairman of the European Coalition for Israel) knelt down before the elderly survivors and expressed his deep regret and apologies for the wrongdoing that had been done to them by their German grandparents and forefathers.  Harald then added, “We will not forget the stories that we have heard today, and these German high school students will share these stories with their children in the future.” 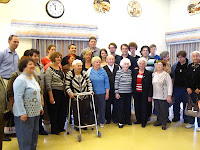 This simple yet sincere gesture deeply moved the Holocaust survivors, causing some of them to weep.  Through networking and facilitating simple encounters such as this, HHC hopes to bring some sense of peace and hope for the final years of this aging group.

The gathering was also attended by a member of the Knesset (Israeli Government) who has become involved in various projects, initiated through her connection with Helping Hand Coalition.

Your People My People is privileged to partner with HHC, knowing their work and the people who run this organisation personally.  If you would like to make a difference in the quality of life for Holocaust survivors in Israel, please use the Donate Online button at the top of the page and note your gift is for HHC.
Email Post
Labels: Helping Hand Coalition HHC Holocaust Holocaust Survivors Israel Jewish Your People My People