Can Holocaust Survivors Survive Life after the Holocaust?

Israeli TV journalists, Orly Vilnai and Guy Meroz enter the small apartment of Esther Frank, a survivor of Auschwitz and Theresienstadt Concentration Camps. They are making a documentary about the plight of Holocaust Survivors in Israel. Esther is reading a letter using a magnifying glass and doesn't notice their arrival. It takes two or three attempts to get her attention before Esther looks up and breaks into a smile as she recognises her visitors from TV. "I watch television," she says, "sports too. I'm interested in everything." Orly asks her why she doesn't wear a hearing aid to help her hear better. Esther looks embarrassed and replies "I can't afford those things. How would I pay for it? From my 3,000 shekels (about £470) a month?"  Orly asks her if its enough to live on. "Of course its not enough." she replies.

Esther lost all her family in the Holocaust. At 88 years of age, she does not have a pension, just the small amount she receives from Social Security. She lives alone and leaves her front door unlocked so that neighbours can find her if she falls and can't get up. The week before the interview, a thief had walked into her home and searched for valuables as she sat watching helplessly. She didn't have anything except 87 shekels in cash (about £14) which he took.

Elizabeth Dargotzki lives on 1,700 shekels (about £270) a month. She has to spend about £50 a month on medication. Sometimes she doesn't have enough money left to buy food. "I was in the ghetto so I know about hunger." she says. "For me, hunger is nothing. I'm used to it." The journalists ask her about her family. She had a daughter but she died. Now she is alone. 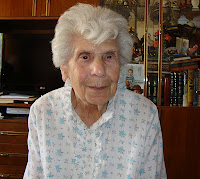 Ironically, some Holocaust Survivors who made new lives in Israel after the war have been forced to return to Germany for their financial survival. The minimum allowance that a Holocaust Survivor living in Germany will receive from the German government, is around £720 per month, compared to the minimum grant in Israel of £53 per month. Israeli Government welfare services are overwhelmed and underfunded. Holocaust Survivors strong enough to make the journey to the welfare office face long queues and complicated bureaucracy that may, if they are successful, result in some extra money for glasses or dentures.  "We survived the Holocaust but we can't survive daily life in Israel." said one desperate applicant.

Some Survivors protested to the government about their predicament. "I don't want to die. I am cold at home. I can't turn on the heater. I can't afford to pay the electricity bills," cried out one elderly lady. "We survivors have reached an age when the end is near. How long have we got? Another year? Two? Five?" said another protester. But with government funds already stretched to the limit, there is not much likelihood of extra funding being channelled in this direction. The only hope for most of these elderly heroes comes from charities working to alleviate their suffering. Your People My People partners with organisations reaching out to Holocaust Survivors in Israel, aiming to offer a helping hand and provide a sense of dignity for them before it's too late.

The filming of this documentary took six months.  5,400 Holocaust Survivors passed away during that time, about 1,300 of them died in poverty. Before the documentary was broadcast on Israeli TV, Esther Frank also died.

Watch a shortened version of the original documentary below. Meet Esther, Elizabeth, and others, sharing their stories. The truth is shocking and heart breaking:

OR EMAIL US FOR MORE INFORMATION:  info@yourpeoplemypeople.org