Everyone loves a good story. Especially when the hero or heroine overcomes incredible odds and thwarts the evil plans of the enemy. The Biblical Book of Esther is one of those great stories: a young girl from a minority refugee community finds herself in the royal household of the King of an empire. Hearing of a dastardly plan to annihilate her own people, she submits herself to God and prepares to challenge the King, potentially at the risk of her own life. The villain of the story, Haman and his sons are executed but the wheels of his wicked scheme are already rolling. So, the King grants the Jewish community permission to defend themselves against those who are trying to kill them. Bloody battles ensue, in which many people are killed. By the end of the story, the Jewish community has survived and to mark the end of these battles, Esther's uncle Mordecai (who has his own interesting side plot in the narrative) writes a letter to the Jewish community of the empire...


"Mordecai wrote a letter and sent copies to all the Jews in all King Xerxes’ provinces, regardless of distance, calling for an annual celebration on the fourteenth and fifteenth days of Adar as the occasion when Jews got relief from their enemies, the month in which their sorrow turned to joy, mourning somersaulted into a holiday for parties and fun and laughter, the sending and receiving of presents and of giving gifts to the poor."                                                       from The Message (MSG) - Book of Esther, Chapter 9

This celebration called 'Purim' is celebrated by the Jewish community around the world. To put it in a modern perspective, I imagine the relief and joy of the people was similar to that experienced by the allies at the end of World War II, when spontaneous dancing and celebrations filled the streets. In 2013, Purim falls on 24th February. As with all Jewish holidays, it begins at sundown on the day before.

How to Celebrate Purim 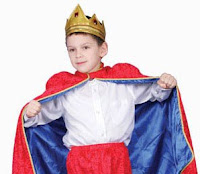 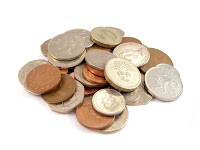 "And they did it. What started then became a tradition, continuing the practice of what Mordecai had written to them. Therefore, because of everything written in this letter and because of all that they had been through, the Jews agreed to continue. It became a tradition for them, their children, and all future converts to remember these two days every year on the specified dates set down in the letter. These days are to be remembered and kept by every single generation, every last family, every province and city. These days of Purim must never be neglected among the Jews; the memory of them must never die out among their descendants. Queen Esther, the daughter of Abihail, backed Mordecai the Jew, using her full queenly authority in this second Purim letter to endorse and ratify what he wrote."
The Message (MSG) from the Book of Esther, Chapter 9 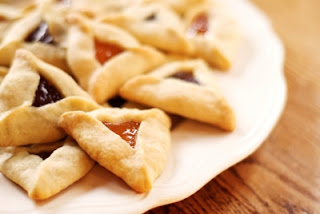 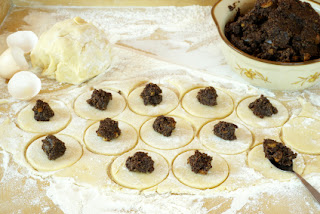 1. In a large bowl, cream together the butter and sugar until smooth. Beat in the eggs one at a time, then stir in the orange juice and vanilla. Mix in the baking powder, then gradually stir in the flour until the dough forms a ball. Cover and refrigerate at least 2 hours.
2. Preheat the oven to 190 C / Gas mark 5. Grease baking trays. 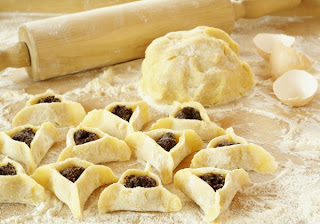 3. On a lightly floured surface, roll the dough out to 6mm thickness. Cut into 7cm circles using a biscuit cutter or drinking glass. Place circles on the prepared baking trays. Spoon 1 teaspoon of filling onto the centre of each circle. (Any more and it will ooze out) Pinch the sides of each circle to form a triangle, covering as much of the filling as possible. The biscuits may be frozen on the trays if desired to help retain their shape while cooking.
4. Bake for 8 to 10 minutes in the preheated oven, until light golden brown. These are best undercooked slightly. Cool on the baking tray for a few minutes before removing to wire racks to cool completely.

Email Post
Labels: Biblical Feasts Esther feasts For Such a Time as This Israel Jewish Jewish roots Purim Your People My People