Victor Bahbah, Pastor of ‘Fountains of Salvation’ Arabic Congregation in Jaffa felt in his spirit to do something special to honour the Lord on the auspicious date 12.12.12. He called Avi  Mizrachi , a Jewish, Hebrew speaking Pastor and suggested they bring their two congregations together: Jewish and Arab to worship and pray on the 12th December 2012. It also happened to be the 4th night of Hanuka. 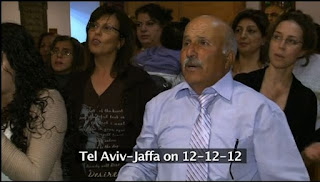 They met together as ‘One New Man’. Worship was sang in Hebrew and Arabic, Pastor Avi lit the Hanuka candles and declared that Yeshua is the Light of the World.  They shared the Lord’s Supper together and recognised Yeshua’s redemptive power in their lives.

“May our worship, fellowship, and communion testify that Yeshua (Jesus) the Messiah is the only one who can and will bring peace to Israel and the entire Middle East. As it says in the Letter to the Ephesians:   ‘So as to create in Himself one new man from the two, thus
making peace.’ (Ephesians 2:15c)”

Check out this video of the highlights and hear from Victor Bahbah and Avi Mizrachi as they share their hearts about unity in Yeshua: