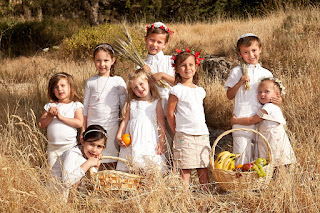 Do you know the history behind the Feast of Pentecost?

For those of us from a Christian tradition, Pentecost speaks of the New Testament outpouring of the Holy Spirit on the disciples gathered in Jerusalem after the resurrection, but did you know that Pentecost began in the Old Testament as a Harvest festival?

Pentecost was one of the three national Feasts that required all the men of Israel to appear before the Lord at the Temple in Jerusalem. These appointed times of pilgrimage to the Holy City were known as the Great Festivals. Exodus chapter 23 describes them as the Festival of Unleavened Bread, the Festival of Harvest with the first fruits of the crops you sow in your fields and the Festival of Ingathering at the end of the year. We might know them better as Passover, Pentecost and Tabernacles. 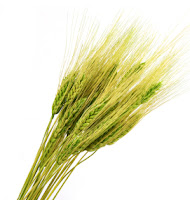 Pentecost gets its name from its connection to the Feast of Passover. On the first day after Passover, the Lord instructed Israel to take a sheaf from the first harvest of spring, which was the winter barley and present it to the priest who would wave the sheaf before the Lord. Fifty days (7 weeks) after the sheaf-wave, they were to present an offering of new grain to the Lord. (Exodus 23:15-16) Pentecost is the Greek word for 50 and its Hebrew name 'Shavuot' means weeks. So 50 days/7 weeks after the Passover barley sheaf presentation at the Temple, the people of Israel were to celebrate the Feast of Pentecost/Shavuot. The sheaf of barley was a promise of the full harvest that was to come seven weeks later.


The Bible also refers to it as the Feast of Firstfruits (Exodus 23:16, Numbers 28:26) as this was the time to present before the Lord a sample of the first fruits of all the harvest. When the fruit began to ripen on the trees, the owner would mark the first fruit to ripen by tying a reed band or other distinguishing mark around it in order to separate this as 'firstfruits' (Bikkurim in Hebrew). Later, when the fruit was harvested, he would be able to identify which ones were the first to ripen. The Bikkurim were collected from the seven species for which the Promised Land was to be praised (Deuteronomy 8:8): wheat, barley, grapes, figs, pomegranates, olives and dates. At the time of harvest, the fruits identified by a reed band would be separated.  Special baskets were prepared for the pilgrimage to Jerusalem.  The rich brought their firstfruit offerings in baskets overlaid with gold or silver, the poor used wicker baskets of peeled willow. The layers of fruit were separated with decorative leaves and grapes were positioned amongst the fruit to make the baskets look as beautiful as possible. 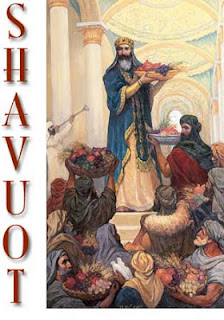 The Mishnah (an ancient Jewish text) records how the pilgrims made their way to Jerusalem. The following paraphrase by the Temple Institute in Jerusalem gives us a vivid picture of the rejoicing pilgrims as they process to the Temple.

"Innumerable streams of pilgrims made their way to Jerusalem from towns and villages all over the Land, in large bands and individually. Many families travelled by foot, with the little children in tow; some rode atop camels and donkeys; some even rode in wagons and chariots. As men, women and children trekked through bountiful golden and green fields of harvest, the entire land was literally teeming with excitement and anticipation, as the great throngs of festival worshippers took over every road and path. They crisscrossed the countryside from every direction and approach, converging together as they travelled towards the city of each vicinity's local Assembly Head, who was the official responsible for the pilgrims.


Descriptions in the writings of the Mishnah and Midrashim abound which paint a vivid picture of the caravans of pilgrims in procession, and how these entourages appeared as they bore their firstfruit offerings, by hand, laden in wagons, or on their heads. Those who were at the head of the procession and were closer to Jerusalem, carried fresh fruits - for since they were closer, there was no danger that their offerings would spoil. Those who were further back and who would not arrive as early, brought dried fruits. Sheep, goats and bullocks also accompanied the great processions, to be sacrificed in the Holy Temple as the various holiday offerings. 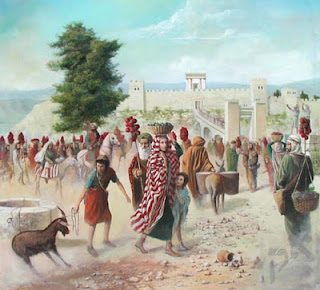 In each district along the long road to Jerusalem, all the pilgrims from the outlying towns and villages gather together in the city of the local Assembly Head, who is responsible for the pilgrimage. From there, the entire multitude will continue their procession to Jerusalem all together, in a large entourage-for "The King's honor is in a multitude of people" (Proverbs 14:28).

In the Assembly Head's city, the pilgrims spend the night sleeping in the town's streets, under the open sky. They are awoken at dawn, as the first rays of sunlight begin to illuminate the sky, by the overseer who cries out: 'Get up, and let us go up to Zion, to the House of the Lord our God!'" (Jer. 31:5)

As the caravans of pilgrims draw near to Jerusalem and the Holy Temple, an ox whose horns are overlain with gold and wearing an olive branch crown,  is led before them, and flutes are played as the company advances. As they make their way, they sing out "I was glad when they said to me, 'Let us go to the House of the Lord!' (Psalms 122:1). As the festive entourage draws close to the outskirts of the city, a delegation is sent on ahead to the Holy Temple to announce their arrival. 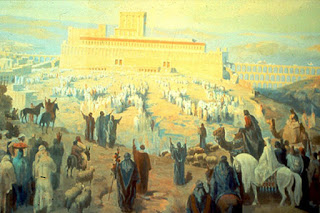 While awaiting the arrival of the officials and treasurers from the Temple, the pilgrims beautify their 'Bikkurim' (firstfruit) offerings, placing the dried fruits towards the bottom and the fresh fruit on top.

All of the assistant priests and Levites and the officers of the Temple would go out to greet them, and all the trades people of Jerusalem would cease their work to stand and greet them as they entered the gates of the city: 'Our brothers from so-and-so, welcome, and peace unto you!" And as the entourage entered the city, the pilgrims joyously sang "Our feet stood steadfast in your gates, O Jerusalem!" (Psalms 122:2)"

Every year at Pentecost (Shavuot), the whole nation of Israel joined together to bring an offering of thanks to the Lord, the source of all blessing. Even today, the children in Israel decorate baskets of fruit to take to school to celebrate Shavuot.  "And you shall rejoice in all the good things the Lord your God has given to you and your household" Deut. 26:11

"Every good and perfect gift is from above, coming down from the Father of the heavenly lights, who does not change like shifting shadows. He chose to give us birth through the word of truth, that we might be a kind of firstfruits of all he created."  James 1:17-18