To Console Those Who Mourn In Zion: a ministry to the survivors of acts of terror. 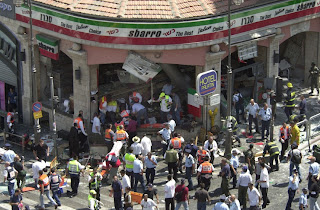 For one Israeli mother, a personal encounter with terrorism became the catalyst for the establishment of a ministry to help other victims of terror.

Ahuva's* son was in the centre of Jerusalem having Pizza with friends in the crowded 'Sbarro' restaurant when a Hamas suicide bomber entered and blew himself up.  Ahuva answered the phone to hear her son crying "Mum, it's raining blood!" She screamed at him to get out of there, then the phone went dead. All of his friends were killed ... they attended too many funerals in the following days. In total, 15 people were killed and a further 130 were physically injured not to mention the many hundreds emotionally scarred by the trauma.

A few years earlier, Ahuva's* elder son had been lynched by a group of Palestinians while completing his compulsory army service and beaten almost to death - he was 19 years old. The story was given a lot of  attention in the Israeli  media as video of the lone soldier being beaten by the angry mob was broadcast across the nation. The soldier was criticized for not fighting back and the subject was much debated. People began to call the soldier's mother and Ahuva* found herself an impromptu spokeswoman for victims of terror.


Experiencing the attempted murder of both of your sons and then watching them live through the resulting emotional trauma everyday, would lead any mother to want justice and retribution. But, a very strong, personal experience with the Lord led Ahuva to the heart revelation that she was not fighting against flesh and blood but against principalities and spiritual powers (Ephesians 6:12). She made the hard choice to forgive, but everyday she knew she would have to choose afresh to forgive and relinquish her right to justice. 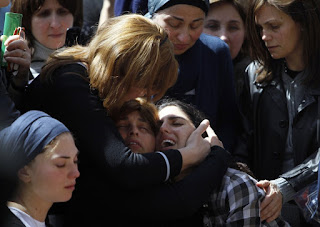 After the Pizza restaurant bombing, women began to contact Ahuva*, many of them from the 'Haredi' ultra-orthodox Jewish communities. They had lost family and were looking for someone who could understand their grief and relate to the particular pain associated with loss through terror.  A ministry of encouragement and support began to grow out of the graves and grieving. Beauty began to return from under the ashes: slowly, step by step, the heaviness began to lift.


"To comfort all who mourn,
To console those who mourn in Zion,
To give them beauty for ashes,
The oil of joy for mourning,
The garment of praise for the spirit of heaviness;
That they may be called trees of righteousness,
The planting of the Lord, that He may be glorified.”
Isaiah 61:3 (NIV)

Every month, Ahuva prays for a strategy for helping those who come to her. For many years, she ran camps for the children. The widows and bereaved mothers were so overwhelmed by grief that they couldn't cope even with the basic necessities of life and their children were floundering. Ahuva invested in the children, recognizing them as the keys to healing for the whole family. She is also able to offer emergency help while families are still in shock. During this first period of trauma, even preparing a simple salad becomes a massive hurdle, but with time, a moment of change can be seen when an individual begins to move forward.

Recently, Ahuva has invited a chef to come to her home and work with the women - to teach them and encourage them to try new things. Small steps are massive victories for victims of terror whose lives have been so tragically impacted by grief and fear. A woman Ahuva had been working with for many years, proudly showed the group a bus ticket. She had been on a bus for the first time since she had experienced a terror attack 7 years ago. She had a victory. This is the Kingdom of God advancing - moving those who mourn, from darkness and fear, to hope and a future.

If you would like to help us support Ahuva* as she works to 'console those who mourn in Zion', please click the Donate Online button at the top left of this page.