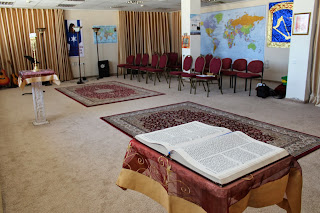 “Golden curtains surround you, a huge map of the world hangs behind you, and windows sit in front of you overlooking the bustling city of Tel Aviv. Glorious songs of worship and praise lift you up, the smell of candles burning from the menorah draws you into His Presence, and the Word of the Lord, always open, sits before you to declare like a sharp sword. You lift your hands in the air as tears stream down your cheeks. You are crying out for the Peace of Jerusalem, the salvation of the Jewish people, and for the Army of God in Israel to unite and bring in the harvest for the Kingdom of God. This is the VIP Prayer Tower, where we stand in the gap for Israel and its people.”

The VIP Prayer Tower is a house of prayer overlooking downtown Tel Aviv, run under the ministry of Avi and Chaya Mizrachi.  It is a place solely dedicated to meeting with the Lord in worship and intercession.
They currently have 10 scheduled meetings per week, and invite believers throughout the Land, and visitors from abroad, to come and pray with them. Each watch focuses on a different need, be it the salvation of Israel, the abolition of the prostituted women, or for the Body of Messiah worldwide.

During Passover this year, Believers throughout Israel gathered in the VIP to pray for the deliverance and salvation of the Lord’s chosen people. Since then, Simon, who coordinates the Prayer Tower, felt called to begin a monthly prayer meeting that would unite the intercessors of Tel Aviv to pray together for its transformation and revival. 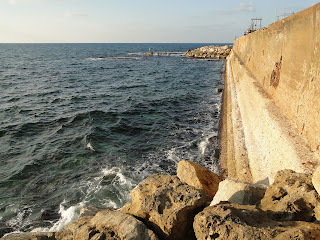 These monthly, United for Tel Aviv, meetings have been wonderful, as the Lord has knitted together the hearts of those present. “Even on that first evening,” Simon recalls, “The Lord was speaking to us about the importance of standing together as a united wall. One of our volunteers saw a picture of us each as one of the Lord’s stones, strong by itself, but even more powerful when built together as a wall. The waves of our adversary are trying to hit Tel Aviv, but we can stand as a breaker for the waves to crash and retreat back to the sea.”

“During other meetings the Lord has used His Word to teach us how to be a worshipping army like Jehoshaphat (II Chronicles 20). We gave praises to the Lord and trusted that the battle belonged to Him. He has also taught us what it means to be both a King and a Priest in His Kingdom (Genesis 14). We as a Body must be both loving and strong; ‘as wise as serpents and as harmless as doves’ (Matthew 10:16b).”

Your People My People have partnered with the ministries run by Avi and Chaya Mizrachi for many years.  Please join your prayers with them and us as we seek the Lord to prepare His Bride and Bring in the Harvest in Tel Aviv!