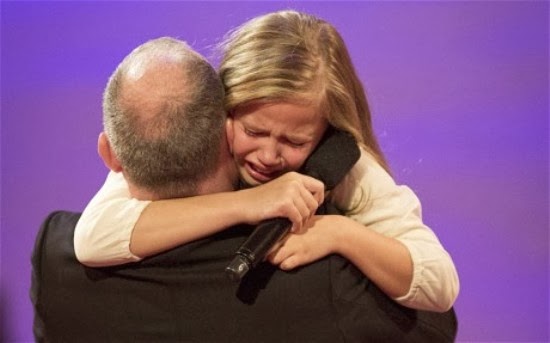 10 year old Megan Adams was overwhelmed and beyond nervous at the thought of singing in front of the Queen and the British Prime Minister at the Royal British Legion's Remembrance Day event at the Albert Hall, London. She had been chosen along with four other girls from families serving in the armed forces, to form an all girls group to sing a special song composed for the event.

"You'll come back when it's over,
No need to say goodbye..."

The song was beautiful and moving, there was hardly a dry eye in the auditorium. Then, a big surprise was announced.  Megan's father, a Naval officer who had been serving in the Indian Ocean, had returned 3 months early and was in the audience. We witnessed the emotional moment when a child who thought their father was far away, sees him returning. Visibly overcome with emotion, Megan cried "Daddy!" and raced to meet him. As he engulfed her in his arms, she burst into tears and held him tight. He got down on his knees and hugged her for what seemed like an eternity. The one her heart had longed for, had returned and she was at peace in his arms. 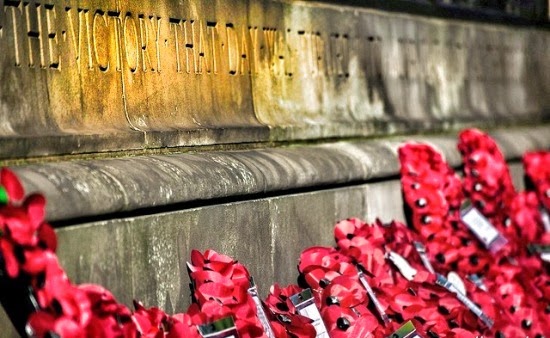 Every year, a memorial day is set aside to remember the sacrifice made by many young men and women, who gave their lives to rid the world of tyranny and secure our freedom. Wreaths are laid, special songs sung and eloquent speeches delivered. At the Royal British Legion event there were tears as the departed were remembered along with cheers for the elderly Chelsea Pensioners: the ones who survived. The tradition of remembering those who have died for us is common in countries all around the world. In the USA it is called Veteran's Day, in New Zealand and Australia it is ANZAC Day, and in South Africa along with many other nations, they commemorate Armistice Day. It is a day to remember and be thankful.

On a different occasion, over two thousand years ago, another remembrance day was inaugurated. On the night he was betrayed, on the eve of Passover, Jesus took some unleavened bread. When he had said the blessing, he broke the bread and said, "This is my body, which is for you; do this in remembrance of me." In the same way, after supper he took the cup, saying, “This cup is the new covenant in my blood; do this, whenever you drink it, in remembrance of me.” 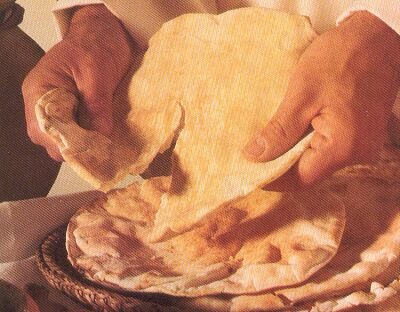 The symbolism of Passover was very familiar to the disciples and Jesus was reinterpreting it to explain the shocking events that were soon to follow.  Israel looked back to the Passover in Egypt as a defining moment in their history, when their identity as a nation began. It was when they were delivered from death and slavery through the powerful hand of God and were freed to go and worship Him as a nation. Many years later, through an act of sacrifice at the time of Passover, we would also be delivered from slavery to sin and set free to serve the Lord. As Jesus led the disciples through his last Passover ceremony, he told them "to do this in remembrance of me."

But unlike other memorials and Remembrance Days that are filled with sadness during their commemoration year after year, this remembrance is for a limited time only and is filled with hope. Paul says, "For whenever you eat this bread and drink this cup, you proclaim the Lord’s death until he comes." Each time we take bread and wine and remember the sacrifice that was made for our sins, we also remember that he is coming back. The story didn't end with the crucifixion, there was a resurrection and he is coming back for us!  Each time we share the Lord's supper together we proclaim that he died and will come again.

"You'll come back when it's over..." sang Megan, in the performance at last November's Royal British Legion Remembrance Day. The unbridled joy and relief that she expressed at her father's return is but a shadow of the elation we will feel when our Messiah returns. The One our hearts long for will return and we will be at peace.

You can watch the Megan's moment here: