A social worker, paying a routine visit to an elderly couple, was shocked to find them huddled together on a sofa - terrified and wearing bicycle helmets.

The couple were Holocaust Survivors living in the seaside town of Ashkelon in Israel. At the time, over 100 rockets had been fired on the town from Gaza in one week. A few days earlier, the couple had assured the same social worker that they were doing fine and didn't need any help. But the reality was that the trauma of relentless air raid sirens had triggered memories from their childhood in the Holocaust and had left them desperate to do something to protect themselves. Physically unable to run down to the public bomb shelter, they had bought bicycle helmets in the vain hope it would protect them from a rocket attack.

About 400 Holocaust Survivors live in Ashkelon, which is located about 13km/8 miles from the border with Gaza. Your People My People visited with some of them a couple of years ago and even then, when the rocket attacks were less frequent, they shared with us about the fear they experience whenever there is an air raid siren. "I thought I had escaped from the Holocaust to somewhere safe," said one elderly lady, "but now we experience it all over again." Living under the constant threat of rocket attacks is stressful for even the most able-bodied, but if you are elderly and unable to run to a shelter within the necessary 15 to 30 seconds, it is terrifying. If you are out on the streets and unable to find cover, the Home Front's recommendation is to throw yourself to the ground with your hands over your head  - obviously
impossible for the elderly.  Now mostly in their 70's, 80's and 90's, many of the Survivors are afraid to go out to the shops to buy their groceries because of the possibility of an air raid happening while they are out.  During these times, the emotional scars and fears from growing up in the Holocaust intensify and many suffer with the symptoms of Post Traumatic Stress disorder.

During these difficult times, the help these Holocaust Survivors receive from local organisations like Helping Hand Coalition (HHC) is more important then ever. They reach out to the Survivors with practical help and home visits. Staff and volunteers spend time talking with them and helping them overcome their fears. They also organise 'Shalom Houses', a weekly gathering where the Survivors enjoy a meal together with other Holocaust Survivors and can build friendships with each other and discuss any problems. Knowing that they are not alone, that people care about them and are concerned for their welfare, is very important to help them get through.

It is also important to provide opportunities to get away from the stress of living under daily rocket fire. Hotel Gilgal in Tel Aviv, which is run by Messianic believers, recently invited Holocaust Survivors from Sderot (a town in the south of Israel near Gaza which has been under severe rocket attacks for years) to spend time in their seaside hotel for a time of respite and refreshing. They had heard that the elderly citizens were afraid to leave their homes to buy groceries, so at the hotel, a delicious feast awaited them on the roof terrace with stunning views over the Mediterranean. 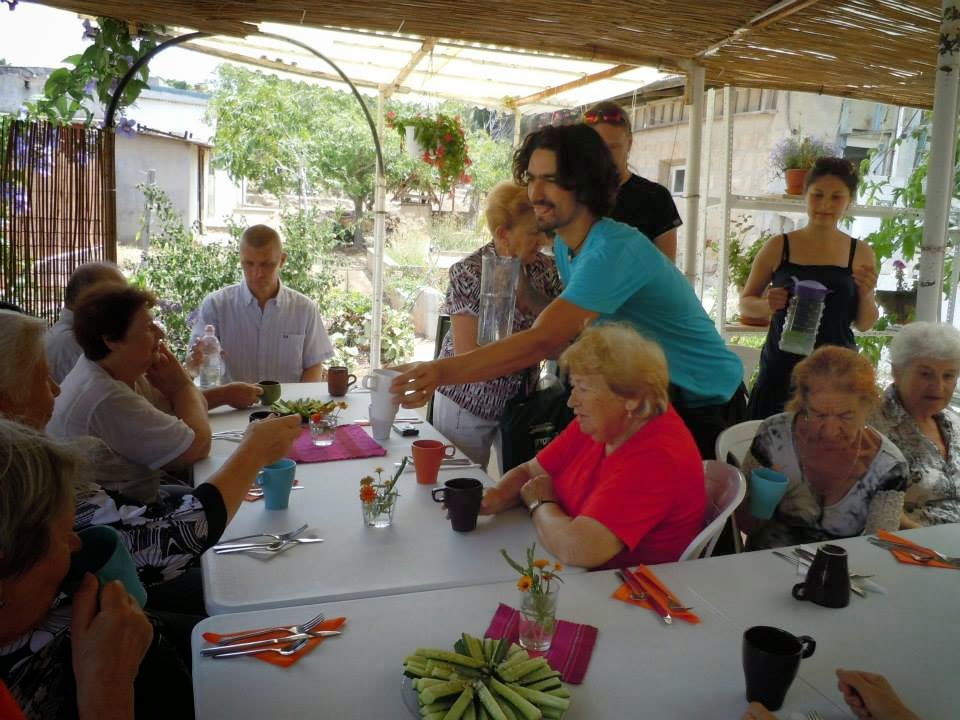 Helping Hand Coalition recently organised a trip for some Holocaust Survivors to Zichron Ya'akov, a beautiful historical village in the north of Israel, where they enjoyed some time of peace and tranquility away from the daily rocket fire they experience in the south. They spent time visiting a museum about the village and ended the day at the home of a young German couple who invited them for a meal. Love and care was lavished upon them to help them forget for a small moment, the stresses of living in Israel.

Your People My People supports the ministry of Helping Hand Coalition. If you would like to partner with us CLICK HERE TO HELP HOLOCAUST SURVIVORS