Jews And Arabs Refuse To Be Enemies 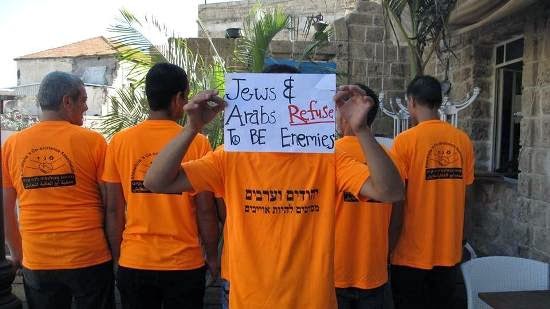 In the midst of the recent conflict, Abulafia, a popular Arab bakery frequented by Jewish and Arab customers, changed their employees uniforms to a T-Shirt that read  “Jews and Arabs Refuse to be Enemies.”  On the back of the T-Shirt were symbols of the Cross, Crescent and Star of David. Abulafia has been baking bread since 1879 in the ancient port of Jaffa (biblical Joppa), a multi-cultural town where Muslims, Christians and Jews continue to live side by side. “We have been around long enough,” said Abulafia Bakery, “to know that nothing but co-existence is the solution to this conflict!”

During times of war and conflict it is easy to put up walls and to become polarized in our opinions for, or against a particular people group. But it is especially during these trying times that we need to look beyond the politics, to pray and work towards unity and peace. We know that our warfare is not against flesh and blood but against principalities and rulers of darkness that are attacking this land and people, both Arabs and Jews as one.

As the war progressed, a group of Jewish and Arab Pastors from the Galilee came together in unity to pray for the situation and declare their faith in God and his plans for their people.


From a Messianic Jewish Pastor:

"Last Tuesday we had a joint prayer meeting for all Galilee congregations (Jew and Arab). We were supposed to have a one and a half hour prayer meeting about the situation and go back to our businesses …The meeting lasted four intensively blessed hours of joint prayers, worship, tears and union! The Lord's presence was strongly felt and we had a sweet taste of what true peace feels like! We prayed for all sides involved. It was especially heart-warming to see how an Arab led the prayer for the salvation of the Jews, and a Jew led the prayer for the salvation of the Arabs. Halleluiah!

"We wish to thank you for all your love, support and prayers at this difficult time!"


From an Arab Christian Pastor:

"On July 15, 2014, several Palestinian Christian Leaders went to a prayer meeting in a Messianic Congregation in Carmiel. On the same day, many Israeli soldiers are part of bombarding Gaza and many Palestinians are shooting rockets at Israel. No doubt, we have different political views as well as different theological perceptions. We have different languages and different cultural values yet we both belong to the body of the Messiah. Focusing on the Messiah is no doubt the best way for us to be together. This was the main spirit of the meeting. At the entrance of the church there was a verse written on the wall. It says, “For he himself is our peace, who has made the two one and has destroyed the barrier, the dividing wall of hostility” (Eph 2:14). It was written in Arabic and Hebrew.

"The meeting started with repentance and a sincere cry for a spiritual awakening in the country. I was truly impressed by the sincere prayers seeking the forgiveness of God not only at the level of the individual but also at the level of the whole nation. People cried out before God as sinners seeking divine mercies. I was quickly able to identity myself as a sinner. This united us. We are a group of sinners in the presence of a Holy God. We can only compete in our confessions instead of claiming moral superiority. Our confessional prayers were followed by prayers for the salvation of both Jews and Palestinians. We prayed for Israeli leaders and for Palestinian leaders. We asked God to grant them wisdom and the ability to spread peace, not war. 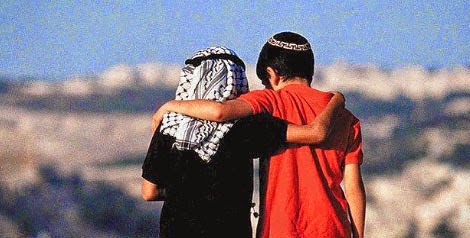 "Admittedly, there were a few
theological areas that I would disagree with and there were political views embedded in a few prayers. However, I was continually reminded that I am a sinner in the presence of a Holy God. Further, I am in the presence of sincere followers of Jesus who are humbling themselves and reaching out with a worldview rooted in biblical love, peacemaking, and repentance. I am now wondering: how to embody these prayers in our daily decisions? How can these prayers impact our vote? How can our unity in the Messiah influence our theology and even our political realities? No doubt this is a great prayer meeting and the one who started a good work will carry it on to completion until the day of Christ Jesus (Phil 1:6). Please continue to pray for unity in the body of the Messiah among both Palestinian and Israelis."

Last month, we shared about HOPE (House of Prayer & Exploits) in Nazareth and their commitment to pray for 21 days for the situation in Israel, Gaza and the whole Middle East. If you missed it and would like some prophetic prayer strategy CLICK HERE

Rania, who directs the House of Prayer in Nazareth recently shared the following update:

"In the midst of increased tension and bloodshed in the last 4 weeks...it's important to declare our love to each other, Jews and Arabs are destined to walk together as one family in Messiah Jesus of Nazareth. We refuse to let the enemy keep dividing and stealing from us the great reward of Jesus' suffering - to see His family united in Him! How can we do this? I guess much wisdom in this saying by F.B. Meyers: "The only hope of decreasing self is an increasing Christ"

"Humility and self denial is the secret of redemption. When we deny our selves and humble our selves, Christ can be seen in us, for we should decrease so He will increase in us. Then we may be able to prefer one another and embrace even our enemies and love unconditionally!

"There hasn't been a more crucial time to embrace humility, and walk the same path our master and Lord walked before us. The path to victory and glory!"

As requested by the believers in Israel, please keep praying!