"The Middle East is not too difficult for our God!" 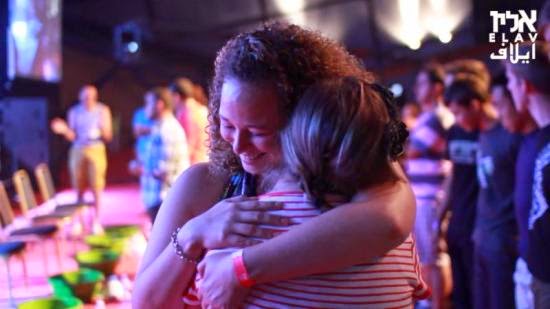 It is not the easiest thing, even under normal circumstances, to put on a conference for Israeli Jewish and Arab young people together with Arab Christians from Jordan and the Palestinian Territories.  But with a backdrop of kidnappings, murders, riots and a developing war with Gaza - racial tensions were at boiling point.

Undeterred, the organisers of  ELAV, an annual youth and young adult conference held in Israel, trusted the Lord to move in powerful ways and break-through despite the obstacles.  "These young people came carrying a lot of hurt because of all the recent violence here in Israel," said Rick Ridings, the Director of ELAV. "Many of them thought they had dealt with these feelings, but because of the kidnappings and killings they are in pain, on both sides."

Around 900 young people descended on the city of Haifa, to attend ELAV, which means 'Unto Him' in Hebrew.  About 500 Israeli Jewish believers, 300 Arab Christians from Israel, the Palestinian Territories and Jordan and 100 from other nations. Despite their diverse backgrounds, they had one important thing in common: they were passionate about God and expectant to meet with him during the 3 day conference.

Instead of opening the event with the usual exuberant time of worship, Rick and his team, felt it was important to begin by sharing the Lord's Supper together. Addressing the gathered young believers, Rick declared, "You, through the Lord, are the answer to the difficulties we are having right now. It is us, the Body of Christ that God uses...God looks for someone who will stand in the gap, the hole in the wall. To build up the wall of protection again. I felt the Lord speak to my heart through a verse in Isaiah 28:6 "God will be...a source of strength to those who turn back the battle at the gate." You are the ones God has called together to turn back the battle at the gate. More than ever before there needs to be the grace for Jewish, Arab, Palestinians and internationals to come together with one heart...We believe first of all, the Lord wants us to take the Lord's supper together and through that to declare into the heavenlies that Jesus is the answer. That we proclaim together that it is his blood, his cross, that has broken down the middle wall of hatred. (Ephesians 2:14) As we take the Lord's supper together we are not just proclaiming it to each other, we are proclaiming it into the heavenlies that Jesus has already won this battle...he has paid the price to heal every wound in our hearts. If you felt a lot of difficult emotions coming up this week, He will bring healing right now as we take his covenant meal together...it is not about us. It is all about him..."

A Jewish Pastor blessed the bread and an Arab Pastor blessed the wine. Together they declared Yeshua/Jesus' victory: The power to break down barriers that divide and to transform fear and hatred into unconditional love. They prayed healing and peace not only for those at the conference, but also that they would bring healing to all around them, and be a channel of Yeshua's life to push back the power of death in the land. "As hundreds of young people came for communion," shared Rick Ridings, "we proclaimed that we would not allow the tensions of the past weeks to pull us apart, but instead demonstrate that:
'He himself is our peace, who has made the two groups one, and has destroyed the barrier, the middle wall of hostility...and has made of the two, one new man, Jew and Gentile.'"

One of the worship teams, on the first evening, was from an Arabic church in Jerusalem's Old City. A singer shared that she had been unable to leave her house because of rioting in the streets. She had prayed to God to make a way because she desperately wanted to come to ELAV. There was a lull in the violence and she was able to leave. "Send your Fire, release your Spirit," the worship leader cried out and began worshiping in a vibrant Middle Eastern style. The hundreds of young people gathered in the hall were soon engaged in enthusiastic and heartfelt praise, worshiping and dancing together in unity before their God.

Local teams led worship in Hebrew and Arabic. The young people were serious about entering into the Lord's presence and worshiped passionately in all languages. A message on adoption and acceptance led to a call to wash each others feet. There were lots of tears, hugs and prayers as Jewish young people washed the feet of their Arab brothers and sisters and Arab young people washed the feet of the Messianic Jewish believers. One of the young adult leaders of the event proclaimed from the stage that, "What we are doing here - This is the Kingdom of Heaven!"

"I just want to hug my Arab brothers and sisters!" said a young believer who had grown up in an ultra orthodox Jewish ghetto. "I had grown up with the view that Arabs are bad people but as I washed the feet of my Arab sister, I was able to ask forgiveness for the way my family, and my people look at them," she said, "to hear her say that she forgives me and loves me was so healing. It was the love from Yeshua, nothing else. I never had an Arab friend. Now I have daily contact with my sisters from Ramallah, Jordan and Lebanon."


A young woman from Jordan shared how 'it had been difficult for her to feel in the same spirit with the Jewish Israelis' because she felt there was a wall but she didn't know why. "I was praying and I asked, 'What is wrong God? I want to be in the same Spirit'. So he showed me an image that on my heart there is like small dots. I didn't notice that I had them before but God was telling me 'You need to forgive them more.' The word was 'forgive to the end' and 'love to the end.' God started to pour his love through us to you - as sisters and brothers, as one body. I was honoured to wash my sisters feet for the first time in my life - physically I had never done it before. As I am pouring the water, God was telling me, 'this is my water, my love - I pour through you to others.' While I was washing my sisters feet, I saw the heart was fully cleaned and really as a church, as one body, I want to hug everyone and say 'We love you!"

For the first time this year, there were two special seminar sessions where Jewish, Arab and Palestinian young people could share with each other in small groups. Some people had never spent time with believers from one of the other communities before and had an opportunity to ask very honest questions and share answers. The openness and sincerity of the participants led to a real deepening of relationships.


Guest speaker, Heidi Baker, who works in Mozambique, shared wonderful stories of whole Muslim villages coming to faith in the Lord, and Elisa Poluakan, a leader from the Indonesian youth movement, shared about the break through in his nation where thousands of Muslims are accepting Jesus as Lord. The conference was encouraged to hear these testimonies of revival among Muslims and prayed for an outpouring in their nations too. "The Middle East is not too difficult for our God!" declared Rick.

One of the Jewish youth leaders shared how he met with some of his youth over lunch and asked them what they felt God was trying to show them during the conference. Most of the youth said they felt God was calling them to commit their lives in a deeper way to Yeshua and that they also had a better understanding of how Jewish and Arab believers are one Body, the Body of Messiah. A girl from this youth group shared about meeting some Christian Arabs from Jordan and sitting with them for lunch, "They had never met an Israeli Messianic Jew. They told me they thought all the Jews hated them, that is what they are taught. They were surprised when I told them that most of the Jews do not grow up hating the Arabs."

"Wow", shared another Messianic believer, "...thank you God for showing up in a powerful way and a really cool time to get to know Arab and Jordanian brothers and sisters in Messiah! In the midst of everything that seems like such a mess...God is still alive and working!! On one of the breaks my friends and I met a bunch of the Jordanians - which was really cool since for some of them this was their first visit to Israel. It was neat to hear first hand about life in Jordan as a believer. And God just really showed up at the conference - most of the people there were praying on their knees by the end of each message...and just seeking God together."

The vision of ELAV  is "to provide a safe environment for Jewish and Arab youth and young adults to have personal encounters with the Lord, to wait on him through worship and prayer, to grow in unity, and to be challenged to minister the Kingdom of God into every area of society."

In the midst of political tensions growing throughout the Middle East region, ELAV was an oasis of healing and Agape love. This is the Kingdom of Heaven. As these young people fixed their eyes on the Lord, the differences of opinion they may have had was not the issue. Here were brothers and sisters, from different cultures, speaking different languages but sons and daughters of the same heavenly Father. They were with family and together, as one voice they gave glory and honour to God Almighty and he blessed them for it.

"For he himself is our peace, who has made the two groups one and has destroyed the barrier, the dividing wall of hostility...His purpose was to create in himself one new humanity out of the two, thus making peace, and in one body to reconcile both of them to God through the cross, by which he put to death their hostility" Ephesians 2:14-16

Please continue to pray for the young believers in the Middle East, that they will be catalysts of forgiveness and love in their region. Your People My People would like especially thank those who donated towards the registration for some of the young people that attended Elav this year.  We strongly support and highly recommend the annual Elav conference - please click the Donate Online link at the top of this page if you would like to partner with us to send more young people next year!