The Gospel According To Hanukah 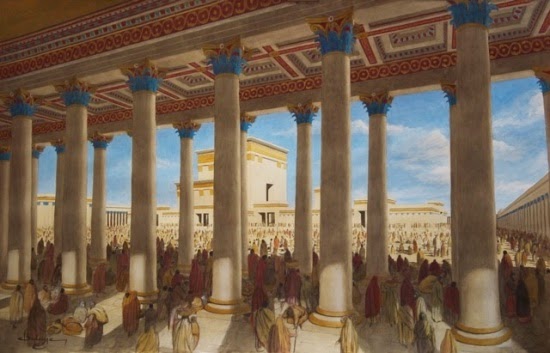 At the time of the Feast of Dedication, Jesus was in Jerusalem teaching in the outer courts of the Temple. (Gospel of John, Chapter 10.)

‘Dedication’ is the English translation of the Hebrew word Hanukah. This Feast celebrates the re-dedication of the Temple in 164BC (between the Old and New Testaments) The Syrian-Greek King Antiochus IV Epiphanes had banned the Jews from practising their religion and tried to force them to worship Zeus. He had desecrated the Holy Temple in Jerusalem by setting up a pagan altar and in 167BC on the 25th of the Jewish month of Kislev, (Kislev is a winter month occurring in November or December)he used this altar to make a pagan sacrifice, an abomination to the God of Israel. A revolt was initiated by a Jewish Priest named Mattathias and continued under the leadership of his son Judas, nicknamed ‘Maccabeus’ (the hammer). The revolt came to be known as the Maccabean Revolt. 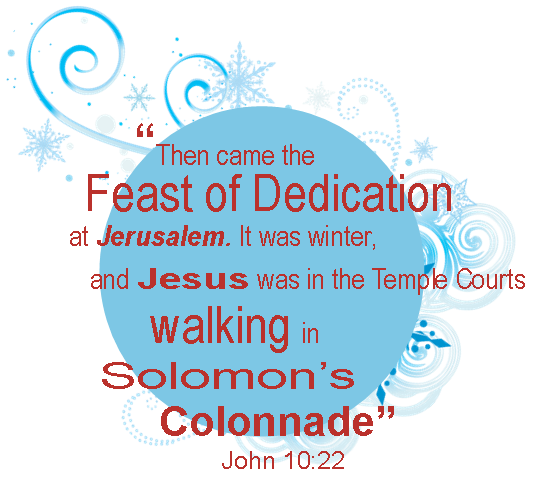 The Maccabees overcame Antiochus’ troops and the Temple was restored and re-dedicated. On the 25th Kislev 164BC, the true sacrifices as God had ordained in the Old Testament, began once again. “At the very season and on the very day that the Gentiles had profaned it, it was dedicated with songs and harps and lutes and cymbals. All the people fell on their faces and worshiped and blessed Heaven, who had prospered them. So they celebrated the dedication of the altar for eight days, and offered burnt offerings with gladness; they offered a sacrifice of deliverance and praise. They decorated the front of the temple with golden crowns and small shields; they restored the gates and the chambers for the priests, and furnished them with doors. There was very great gladness among the people...Then Judas and his brothers and all the assembly of Israel, determined that every year at that season, the days of the dedication of the altar should be observed with gladness and joy for eight days, beginning with the twenty-fifth day of the month of Kislev.” 1 Maccabees 4:54-59. The 8-day Feast of Hanukah (Dedication) has continued to be celebrated with joy and lighting of lamps/candles since that time.

It was at this Celebration, the Feast of Hanukah, the commemoration of the re-dedication of the Temple, that Jesus chose to teach for the last time
in a public setting before his triumphal entry into Jerusalem and the beginning of his final days. “Right next to the temple, at a feast commemorating the re-dedication of the temple, Jesus gives his clearest teaching about his own identity. It is this identity that is the grounds for his replacement of the temple as the place where forgiveness of sins is available and God is to be met.”  IVP New Testament Commentary Series.

Jesus is in Jerusalem, walking in Solomon’s Colonnade, an impressive cloister-like covered walkway with 11.5 metre (38 feet) tall double columns. Although part of the Temple complex, the Colonnade is not in the Inner Courts of the Temple but is situated on the eastern edge of the Outer Court - the Court of the Gentiles. It was a popular place for religious teachers to preach to their followers.

Some Jewish leaders gathered around Jesus and asked  him, “How long will you keep us in suspense? If you are the Messiah, tell us plainly.”

John the Baptist had asked a similar question from his prison cell some time before, but in contrast to these religious leaders, John had believed the testimony of Jesus’ ministry.

So what was the Gospel message Jesus taught on Hanukah?


“My sheep listen to my voice; I know them, and they follow me. I give them eternal life, and they shall never perish; no one will snatch them out of my hand.” 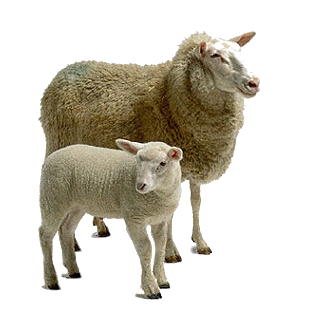 Jesus tells the religious leaders that they are not his sheep because they do not believe.. The sheep he is gathering into the Sheepfold are those who believe. The ones who listen to his voice and follow him. Here is an example of the mystery of divine sovereignty and human free will. The sheep are called by the Shepherd but also need to respond with faith.

Earlier in the chapter Jesus has described himself as the Good Shepherd, who knows his sheep and cares for them even to laying down his own life for them. The amazing assurance of the Shepherd’s love and care continues in his Hanukah sermon.

“I know them…” Jesus/Yeshua, the promised Messiah, the Son of God, the one who is exalted to the Highest place, the name at which every knee will bow - knows you! He knows each one of his sheep.

He not only knows his sheep, but he also gives them eternal life and the promise that they shall never perish. As he is speaking to the crowd, he knows the time is coming soon when he will be required to lay down his life, but he also knows the reward of his suffering and can pass on this assurance to his sheep: No-one will be able to snatch his sheep from out of his hand. In fact, he continues, “My Father who has given them to me, is greater than all; no one can snatch them out of my Father’s hand. I and the Father are one.”

This is a wonderful promise, that still stands today.  The scripture goes on to say that many people came to him and many believed and joined the Sheepfold - a beautiful picture and opportunity for dedicating our life to God at the Feast of Dedication. 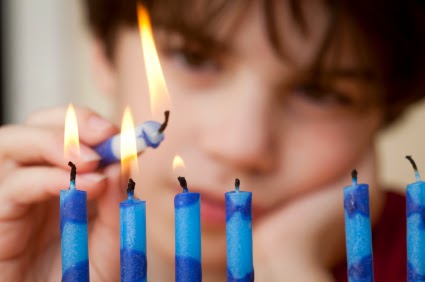