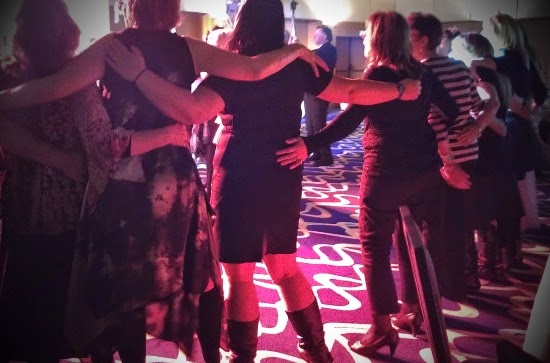 You would have no idea what these women have been through judging by the enthusiastic way they threw themselves into dancing the night away. Their strength seemed endless as they made good use of the dance floor for hours on end.

But each of these women represented a family torn apart by terror. Some had lost a husband, a child, a parent. Some had been emotionally or physically paralyzed by the trauma of being in a terror attack themselves. Standing together on the dance floor, they were for a brief moment, taken out of their private worlds of pain and memories and united together in the celebration of life. This was the annual Purim Banquet organised by Springs of Hope in Jerusalem. "My Mum looks forward to this every year," said one son, "She was afraid to leave her house for two years [after surviving a terror attack on a bus] but this brought her out again."  Several families echoed the same sentiment. Here, they could leave their worries at the door and have some fun with people who understood.

The banquet was also the culmination of an international forum called 'Walk With Me', hosted by Springs of Hope, bringing together experts from around the globe united by the subject of terrorism.

The four day event, held in Jerusalem in March 2015, focused on the 'Voice of the Victim of Terrorism'. The Deputy Mayor of Jerusalem, a victim of terrorism himself, launched the first session. He was the survivor of a molotov cocktail that was thrown into his car as he drove to work. It was laced with glue so that the fire would stick to his body and cause maximum injury. His survival was miraculous. His revenge, he related, was not for more death but for life, which he saw in the birth of his three children who would not have existed if he had not survived. He has dedicated his life to public service.

Springs of Hope, did an amazing job bringing together incredible Keynote speakers from Muslim, Christian and Jewish backgrounds. United by the effects of terrorism in their personal lives, the tone of this forum was not revenge, but hope. Through mutual respect and shared understanding the various participants gave informative presentations and interacted in discussion panels.

Special therapy workshops using art and jewellery-making took place for some of the Jerusalem victims of terror that Springs works with.

Walk With Me 2015 also featured a special screening by Swedish filmmaker Bo Persson who was present to introduce his new film, "Watching the Moon at Night" about terrorism and anti-semitism around the world. Local, short films were also presented by students of the Sapir Academy, Department of Cinematography.

Despite the heaviness of the subject matter, Springs of Hope had intertwined professional musicians into the program, lifting our spirits with beautiful musical renditions. The professionalism and hospitality shown by Springs was exceptional.

The forum concluded with a memorial to Victims of Terrorism and Cantor Moshe Goldberg sang the 'Kaddish', the traditional Jewish prayer for mourners.

We were so impressed with this initiative from Springs of Hope, who for over 10 years have been doing a wonderful and unique work among Victims of Terror in Jerusalem. This was not just another conference. This was a forming together of a network of experts, many of whom had never met before, to be a voice and a catalyst for action. We will be sharing more about this forum in the near future but in the meantime, be praying for the leadership of Springs of Hope as they step out in this new direction -  bringing people together from different countries, religions and traditions to speak out against terrorism.

Email Post
Labels: Israel Jerusalem memory of suffering Middle East Munich Massacre persecution Purim Springs of Hope Walk with Me Your People My People your people will be my people YPMP