The House Where God is With Us 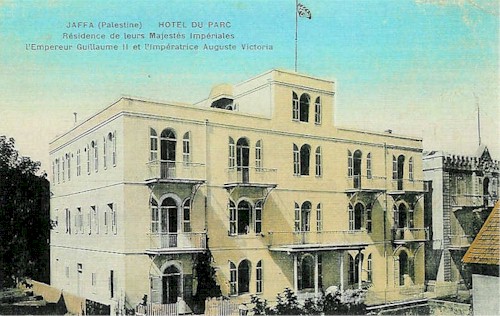 Tucked away in the old German colony, where the cities of Jaffa and Tel Aviv being to merge into one, is a beautiful old building.  It’s history is rich and varied, predating Israel’s War of Independence in 1948 when Israel became a tiny nation State once again, being used as a school, a palace, a hospital  and an hotel, being owned by the Templars, the Ustinov family, along with various others, and in the late 1800s was finally purchased by the Anglican Church’s ‘Christian Mission to the Jews’ - today known as CMJ.
In the 1890s it became known as Bat Tzion (Daughter of Zion) Chapel and was a welcome place for local Jewish believers in Yeshua.  In 1926, CMJ ran their High School for girls in the premises, a mixed group of Jewish, Christian, Armenian, and Moslem children.  And during British rule after the defeat of the Turks, the school became a shining example of how mixed faiths could co-exist in peace and harmony.
After World War II and the establishment of the State of Israel, the school was closed and the Israeli army took over the building until 1954.  After returning it to CMJ, it was initially used to house staff and Arab boys attending Tabeetha, the local Christian School up the hill in Jaffa until the late 1970s when extensive renovations were done to create a Guest House, with facilities for a Messianic Congregation and Study Centre.  The staff comprised of local Israeli and international people and this vision has grown and developed into the thriving community you will find there today.


This old building is today well known as Beit Immanuel, literally translated as ‘The House where God is With Us’, and serves as a guest house for thousands of visitors, Israelis and foreigners alike, who have come to appreciate the simplicity of style and warm hospitality offered by the staff.  Still owned by CMJ, Beit Immanuel is run by local believers, and welcomes Christians from around the world who would like to come and volunteer for a season in Israel.  Beit Immanuel is home to one of the oldest indigenous congregations in Israel today, and has witnessed the explosive growth of the Body of Messiah in Israel over the last 40 years or so.  It stands as a testimony to not only the hope of restoring a nation, but the hope for the message of the Gospel, returning full circle to the shores from which it spread around the world!

Your People My People is always excited to hear from those with a passion to serve in Israel.  If you are interested in volunteering please click here and let us know!