Crowned for a Purpose... 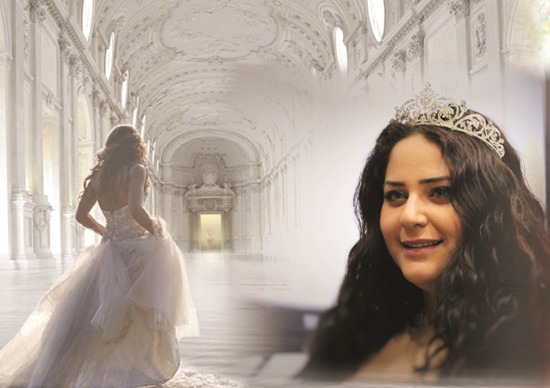 "Who are you?" God and Satan are asking us the same question. "Who in the world do you think you are?" Which voice will we listen to.... the one that sneers with a sarcastic, 'Who do you think you are!' or the voice of the King of the Universe who calls into being all the potential he has placed within each one of us. And the universe replies with a whispered amazement,  'Who ARE you?'

In March, Your People My People, joined 80 Arab Christian women for a conference in the north of Israel that focused on just such a question. Entitled, 'For Such A Time As This...', the worship, teaching and ministry encouraged and inspired the women, all of whom had leadership roles within their local churches, to step up into their destiny as change-makers in their families and communities, for such a time as this. 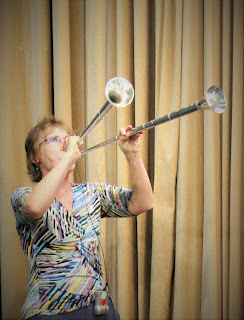 The conference began by welcoming the King of Kings with the blowing of two silver trumpets, fashioned in the style of those used by the priests during the time of the Temple. Awesome times of worship led by talented local worship leaders were complimented by worshippers from the nations including, Julie Meyer (USA), Ruth Fazal (Canada) and Lilo Keller (Switzerland). For many of the local women, the opportunity to be completely free and expressive in Holy Spirit led worship was unusual as their church backgrounds are more conservative. It was so wonderful to see many women set free to express their love for their Saviour in new ways.

Through a beautifully orchestrated schedule of worship, inspiring teaching, times of ministry and prophetic actions, the women were led to recognise their place as beloved ones with spiritual authority. 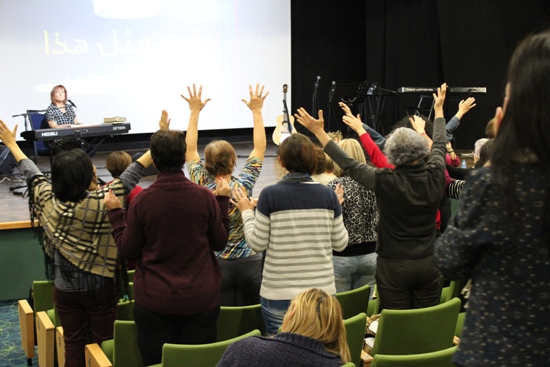 "While one of the worship leaders was singing, it felt as though in the Spirit realm we were going through training right then and there." shared one woman, "It was like a declaration was coming out of her spirit, "I am going to have dominion, I am going to walk in the Lord's authority in my family, relatives, friends, with my region...it's a very large thing, the promise of God is so sure, with an Amen at the end of it. It's something you can take hold of." 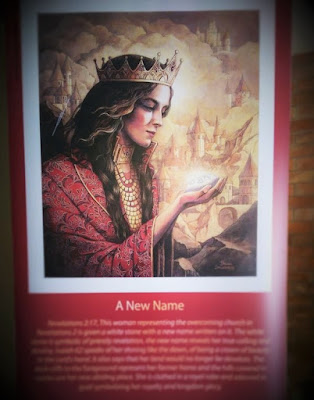 A beautiful picture of a Queen Esther-like woman, wearing a crown and holding a white stone in her hand had been prepared for the conference. Nazareth based 'House of Prayer and Exploits (HOPE)', who organized the event, explained that they had approached other Houses of Prayer around the world to ask the Lord to give them names and scriptures that could be written on white stones and given out to the women at the event. During the conference, they asked all the woman to spend 10 minutes silently waiting on the Lord and asking him for new revelation, then each one went forward to receive a white stone with a new name. There were many testimonies afterwards. So many women received the same name on the stone that the Lord had spoken to them. God was spreading his love over each woman gathered. One young woman shared that during the conference the Lord spoke to her about the realm of worship in his Temple. The next day, she received the same word from another woman. When she took a stone, it was engraved with the same scripture. Another shared that even before the conference God placed a new name in her heart but she thought it was just her own thoughts. During the time of waiting on the Lord, she heard him say, "No, I gave you this name."  After she went up to get her white stone, she sat with it in her hands for 2 or 3 minutes before she turned it over and was blown away to see the same name written there. She was so excited. She felt the Lord was confirming to her that what he had said to her was real. Her mother was also at the conference and had the same experience. The exact same name the Lord had spoken to her previously, was on the stone she received. She felt the love of the Lord so strongly she began to weep. It was the prayer of the organising team that each women would have confirmation of the special name God would give her - after the event, they heard so many testimonies from the women that the name they heard in those quiet minutes of prayer was the same as on the stone!

"I experienced deeper and deeper levels of God's love," shared one attendee, "going layer beyond layer, the depth of love that I experienced in all the words that were spoken - from the prayers, from the testimonies and messages, from the actions of the women involved, in the worship...everything was depths, depths of love - there was a presence of love I have never experienced before. Everyone who spoke or shared, I wanted to give a big hug to because there was so much love coming out of everyone. This is the first time in my life that I have ever experienced this. It was about the love of Jesus regarding his bride, in that subject about the love of the bride and the groom,  there was a level of understanding and experience of love that I have never experienced before, never touched it before." 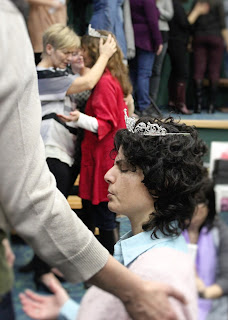 The culmination of the teaching on the love of the Bridegroom for the Bride was expressed in an incredibly moving 'crowning' ceremony. A group of women from Norway had brought beautiful tiaras with them. All the women at the conference were invited to come forward one by one, to have a tiara placed upon their heads as the ministry team prayed over them. Many tears flowed as these Arab Christian women stepped up into their royal commissions 'for such a time as this...', not pulled by a sense of duty but wooed by the loving Bridegroom himself. "As I held the tiara in my hands ready to place it upon one of the women," shared Amanda from Your People My People, "I had such a sense of the honour of the crown, I couldn't hold it lightly. It was as if the glory of the Lord was coming down and resting on these women, and the crown was a physical representation of his acceptance and calling forward of each one. It was such a holy moment." 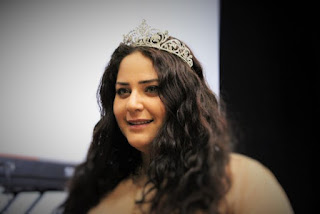 If there had been any doubt at the beginning of the conference of the answer to the question, "Who are you?", the 'crowning' ceremony shouted from the heavens, "You are my Beloved, and with you I am well pleased."

"Something that was very amazing for me," shared one of the attendees, "was the way Julie Meyer shared about an explosion of love. She was bubbling over with love. The Lord used her to enable us to get into the story [Song of Solomon] in a way I will never forget. She was expressing the love of God for us - no matter how you are or where you are at. Whatever you are going to do with your life, the love of God is solid, it will never change. You as his bride, as a part of him will never change... this wedding symbolism, the crowning of the Bride and Groom will never be changed... he has given me the strength to wake up the next day and be confident in his love for me...this surety came to me during the conference. This is something that took place among us - the assurance that God's love will never change for us - he is the one who is our strength. He is the lover of our soul. He is the one we love and he loves us. Thank you so much to you all and to Rania - you have done an obedience to God. Thank you!"

On behalf of Rania and her team at HOPE, Nazareth we would like to say a huge 'Thank You' to everyone who sponsored women to attend this conference. We believe that God did an amazing work in people's hearts. These warrior brides were released to war for the Kingdom in their families, friends, churches and neighbourhoods.


In September, HOPE, Nazareth will be gathering a larger group of Arab Christian women for the 'Arab Deborah Arising' Conference - empowering women to minister in the power of the Holy Spirit and encouraging them to step up into their place of spiritual authority. We are looking for sponsors - if ministry to women touches your heart, please consider sponsoring an Arab Christian woman to attend this important gathering. Together we can make a difference!

Email Post
Labels: Arab believers Body of Messiah For Such a Time as This Hope House of Prayer Israel Nazareth Testimony Women's ministry Your People My People YPMP