A Family for the Holiday

Imagine celebrating an event like Christmas, an important anniversary or a special birthday on your own.  No close friends, no family members around, just you, on your own.  Not the most thrilling of prospects and one that most of us will never encounter.  Thanks to the vision and assistance of Helping Hand Coalition, it is a prospect that many elderly Holocaust Survivors will face no longer!


The holidays in Israel may be different to those in our own culture and take place at different times of the year, but they are no less important as seasons when the family gathers to celebrate, eat, and generally have a great time together!  These special occasions are often difficult for people who have lost loved ones, and particularly so for those Holocaust Survivors whom have lost all family members.   Through the network of Shalom Homes now spread around cities and towns throughout the country, this difficulty is being overcome!

In April this year, while the special Passover meal preparations were being made by Jewish families around the world, a small group of Germans from The March of Life Movement were also making preparations at the HHC Guest House in Caesarea.  That evening they were hosting around 20 Holocaust Survivors from the city of Netanya for what is arguably the most important Feast day on the Hebrew calendar.  The group took care of everything, from planning the menu and cooking the food to setting a beautiful banquet table, complete with flowers picked from the garden.  Great care was taken to arrange the special Seder plates so everyone attending could just arrive and relax and feel at home.  One of the group leaders shared how it was on their heart to show love and support to the Holocaust survivors on one of their main Jewish holidays, but especially on this night, the poignancy of descendants of the perpetrators of the Nazi regime, serving those whom had been their victims, was not lost on anybody.


“The survivors were very touched to know that people are standing and thinking of them even during the Holiday season,” shared an HHC staff member. “From all of the twenty survivors that came for the Seder dinner, only two were couples. Many of them have lost their partner in the last years. This means that they would have been all alone at home for Pesach.  At the end of the night, they were so grateful that they started to give away candy bars and chocolates for everybody who was present. Some of them even started to take off their rings and their purses to give it as a gifts for the March of Life team. These are memories that will always be part of us.” 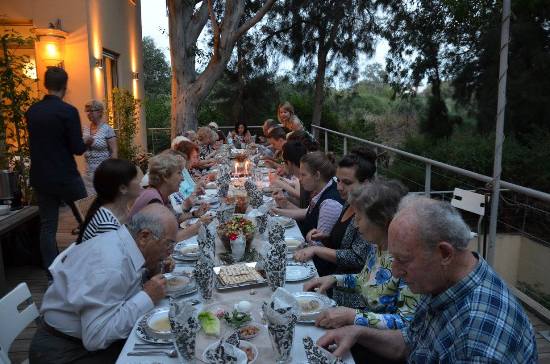 A team member summed up their thoughts, “To have the privilege to spend Pesach with survivors of the Second World War, that 71 years ago were being set free from the concentrations camps!  What better way to celebrate Pesach?”  We couldn’t agree more!


Your People My People actively supports the work of Helping Hand Coalition, reaching out to Holocaust Survivors and others in need in Israel.  If you would like to make a difference to the lives of these precious people, please click here and mark your donation for HHC - thank you!