Although making up only 0.2% of the population in Israel, followers of Yeshua (Jesus) are living out the Kingdom of God in their local communities - making a difference and changing their nation.

In 1989, a newly married Tony Sperandao, passionate about sharing the good news of the Gospel, asked the Lord a heart-felt question:  "I said, Lord, I want to be the most effective young person for your Kingdom – what is your greatest need in Israel? And I just felt the Lord speaking to me with sadness in his heart, telling me, I have no shepherds in Israel.  Feed my flock. And he showed me the woundedness of the people of Israel. The rejection for 2,000 years and I said to the Lord, ‘Hineni  Adonai’,  here I am Lord, send me."

The Lord spoke to this young couple, about opening their home for prayer and bible studies. They started with 3 other families joining them at their home in the city of Kfar Saba and soon grew into a thriving Congregation which they named ‘Kehilat Ha Maayan’, which means 'wellspring congregation'.  "There is no greater ministry than the ministry of Yeshua [Jesus]," continued Tony, "The ministry of Yeshua is to bring restoration to the person, to bring salvation, to bring healing, to bring deliverance, to bring revelation.” 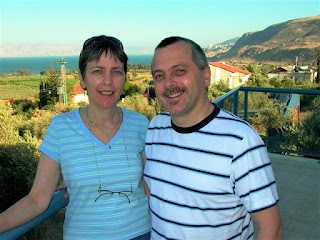 When ‘Kehilat Ha Maayan’ Congregation was started 27 years ago, there were less than 200-300 Messianic Jewish believers in Israel. "We were only a small group”,  shared Tony, “we had only one conference for young people, - everyone knew one another. Now I am glad to tell you that I do not know all my brothers and sisters here in Israel." In the last 20-30 years, the growth of Messianic believers in Israel has been phenomenal.  From a few hundred, their ranks have grown to many thousands.

"This is the work of the Lord.... This is what God has done in Israel in all those years. I am looking and I am amazed to see because scripture is being fulfilled...in the book of Romans chapter 11, it says, I don’t want you to be ignorant my brothers.  There is a veil that has been put on the Jewish people but that veil is going to be removed when the fullness of the gentiles comes in. When you hear that 20-30 years ago there were 200 – 300 believers and now there are thousands of Jewish believers young and old, you know that Lord is starting to remove the veil, halleluyah! There are many more congregations, many more believers and we know that the Lord is working. You know that the first will be last. The first to be saved were the Jewish people and they are also going to be the last ones to be saved and this is a sign for all the nations. When you see Jewish people coming to faith, know that Yeshua is coming back. He is coming back in Jerusalem , the city of the Great King ... it all started here and it will all end here. Jerusalem is mentioned in Genesis chapter 14, (Israel is mentioned for the first time in Genesis chapter 32) and the last time in chapter 21 of the book of Revelation so if you put your finger between Genesis and Revelation, this is all about Israel."

Kehilat HaMaayan located in the city of Kfar Saba, is a thriving congregation of people worshipping Yeshua (Jesus). Blessed with several worship teams and song writers, the Lord has led them to write many new worship songs in Hebrew. Every year, a conference to present new songs takes place in Jerusalem and HaMaayan congregation presented 12 new songs written by 8 different members of their worship team. Watch this video of one of our favourites, 'Ruach Adonai Alai' (The Spirit of the Lord is upon me) written by Tony Sperandeo:
https://youtu.be/vdbGmqLrYck


Kehilat HaMaayan are also reaching out into their community through a ministry to the more vulnerable members of society, especially to single mothers, widows and orphans. And through a house of refuge available as a shelter for people needing emotional and spiritual healing as well as a physical home.

About 3 years ago, Tony and his congregation had the opportunity to minister to some people from India who were living in Israel as care-givers to Holocaust  Survivors.  “It just snowballed,” exclaimed Tony, "they are so open to the Lord. Indians, Sri Lankans, Nepalese – now by the grace of God we also have an Englsih speaking congregation in Tel Aviv."

Pray for Tony and Orna Sperandeo and Kehilat HaMaayan. We were so blessed to hear about Tony's willingness to be obedient to the cry of the Lord all those years ago and we pray for God's continued blessing on all they put their hands to.

Watch a short clip of Tony sharing a little about HaMaayan:

If you would like to help us bless the 0.2%, the believers living in Israel, reaching out to their nation with the love of Yeshua (Jesus).