Jewish and Arab Israelis Reach Out to Syrian Refugees 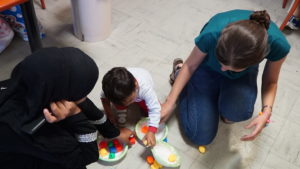 Earlier this year, a group from Dugit traveled to Greece together with a team from an Arab congregation in Nazareth, to minister to Syrian refugees.

Nearly 170,000 Syrian refugees arrived in Greece this year, 40% being children. Seeking safety and peace, these refugees have fled war-torn cities and journeyed across the Mediterranean Sea in overcrowded plastic boats seeking refuge. In the city of Thessaloniki, there are ten camps with an average of 2,000 refugees in each camp.

A House of Prayer in Thessaloniki provided accommodation for the Jewish and Arab Israeli team. Staying at the House of Prayer provided an excellent opportunity to worship and pray together as they began each day.

On the first day, God opened a door to enter a camp just outside the city that had not yet been reached by humanitarian aid. The team were able to clean a school as well as distribute hygiene and sanitation items to hundreds of refugees. Later in the afternoon, they distributed t-shirts to each tent, giving an opportunity to build relationships. As they were walking among the tents, they invited some families to join them at the House of Prayer for a hot meal, fellowship, and family crafts.  Many from the tents joined the Israeli team that evening.  As they spent time showing love to the people, they could see the disappointment and fear wipe from their faces.  They were even able to pray with some of them and give them electronic bibles. 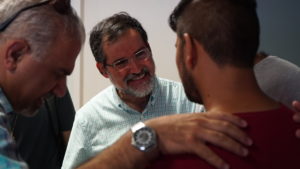 During one of the days in the camps, they met a father who had been forced to flee his city in Syria with his large family.  This family had been in Greece for around five months without a job or income of any kind. Dugit director, Avi Mizrachi was able to share the Gospel during a wonderful conversation with this man. He was happy to allow Avi to pray for him and his family situation. When the man learned that Avi was from Israel, he was so surprised!  At the end of the day, the man asked another volunteer to pray with him to receive Jesus into his heart.  How amazing that through the experience of devastation and loss, this Muslim man ends up meeting a team from Israel and finding eternal life!

During their time in Greece, the Israeli team found that many Muslims were open to the Gospel and each day they saw  (former) Muslims give their lives to the Lord.

Praise God for this opportunity for Him to minister through the unity of a Jewish/Arab team from Israel! The Harvest is ready!
Email Post
Labels: #hopefortheMiddleEast Body of Messiah Dugit Jewish Arab Unity Nazareth refugees Your People My People YPMP