It seemed especially poignant that a beautiful bride dressed in white just happened to be outside having her pre-ceremony photos taken. Inside, 130 Arab Christian women from 13 different Arabic-speaking churches around Israel were worshiping The Bridegroom and preparing His Bride! 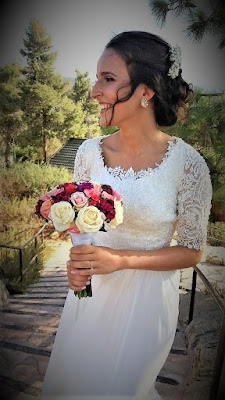 It had rained the night before and in Israel, the scarcity of water always makes rain a symbol of blessing: This was going to be a very special weekend. The Arab women had gathered at Yad Hashmona, a Messianic Conference centre nestled in the hills surrounding Jerusalem, for the second 'Arab Deborah Arising' women's conference.  Rania Sayegh, the organiser and Director of HOPE (House of Prayer and Exploits) in Nazareth, has such a heart to see these women set free and released to be powerhouses of change for the Kingdom of God.

Your People My People had the privilege of joining with a team of 33 women from 13 different nations, who came to bless and minister to the local women. During the pre-conference team preparation time, we were saddened to hear about the lies spoken over women in the Arab world. Much of this has filtered into the culture from Islam but is also prevalent in the churches and Christian families.  In Arabic culture, a baby girl is often seen as a curse. The husband may not even turn up at the hospital and neighbours do not bring sweets to celebrate as they would for a boy. These practices leave deep emotional wounds of rejection and abandonment.  In many cases, daughters will not be entitled to an inheritance even if they are in great financial need. Many struggle to forgive their father and brothers for leaving them in need. This hatred for women filters through the family, so it is not surprising to see women persecuting their daughter-in-laws and even their own daughters. The ministry team felt this was an area that the Holy Spirit was highlighting particularly and we prayed the Lord would bring much healing and deliverance from this spiritual oppression during the conference.

This was the second 'Arab Deborah Arising' women's conference and the women arrived expectant for God to do a new thing - knowing that so many testimonies of  healing and deep works of the Holy Spirit had been shared after the first conference.

One of the speakers from Norway, shared about creation and the forming of the man and women in God's image. She explained that God saw the woman he had created and exclaimed, "wow!" She very gently spoke words of life and acceptance over the women.

During another session, a speaker from Switzerland, shared about the importance of forgiveness and being set free from bitterness.  She explained the spiritual foundation as well as sharing practical steps to walk it out. Many women came forward asking for personal ministry, wanting to be released in this area.

Through times of powerful worship and empowering messages, the Holy Spirit began to minister. Each women had been given a booklet of prayers and proclamations concerning some of the issues that were being addressed. There was a time of corporate repentance and breaking of the power of the spirit of misogyny (hatred of women) over their lives and the lives of their families. Many were touched by the power of the Holy Spirit and received release and healing.  One lady, shared later that she had been struggling with an abusive husband for many years but after the prayer against misogyny, she felt that something that had been stuck deep inside, erupted like a volcano from her belly. It felt like something exploded and she felt such a release and sense of freedom.

It was a joy to see these women set free and released to be who they were meant to be in the Lord: loved and cherished as His precious daughters. Not weighed down by the lies put upon them by their culture. As the worship team lead the room in beautiful worship, some of the international team started to dance with some of the Arab women. Eventually, more and more joined in and a huge circle formed around the room as women who were already dancing invited and encouraged others to join them. This was also a breakthrough moment as dancing does not usually take place in Arab churches in Israel. But the women were so full of joy and the Holy Spirit drew them into intimacy with their heavenly Father who delighted over them.

Throughout the conference, the ladies learnt about Deborah and the other characters in her story recorded in the Book of Judges: Strong women of faith who the Lord used to bring about his purposes. Deborah arose as a warrior against the enemy, but, described herself as a mother in Israel. The importance of the role of mothers (both spiritual and natural) was highlighted as the ones who bring safety and peace to the land.  As a prophetic act, each woman was given a wooden tent stake as a reminder to protect the spiritual ground in their families. They were encouraged to write decrees and promises on the stake, to remind them when they returned to their homes. 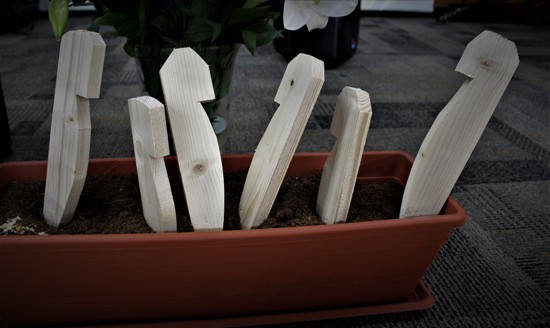 During one time of worship, the leader led the women in praying for all Israel to know the Lord. For every knee to bow as they recognise him as Messiah. The room erupted with fervent prayer for every Arab, Jewish, Bedouin person to see his glory - for every people group living in the land.

There were also some Messianic Jewish women at the conference. One of the young Jewish girls was invited to share what the Lord had put on her heart about praying for the prodigal sons and daughters to return to the Lord. A young Arab girl joined her along with both their mothers and they prayed for each other and the young people in their communities. Other women surrounded them and as representatives of the Arab and Jewish people in the Land of Israel, they took tent stakes in their hands and Rania called everyone to stand. As they  drove them into a container of soil representing their nation,  they proclaimed "All Israel will be saved!" The crowd cheered and roared and shouted out and silver trumpets were blown. Together, mothers of the Land, both Jewish and Arab, crying out for the children to return to the Lord! It was so beautiful to witness this hope for the nation - women pushing in deeper to the Lord, taking spiritual ground for His Kingdom. Not political agendas but a revolution of love. 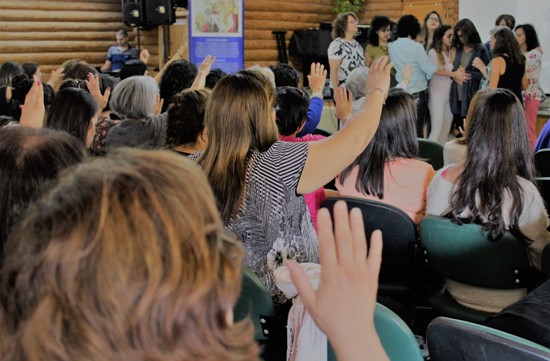 There was also unexpected fruit. Yad Hashmona conference centre has a lovely restaurant that opens to the public for a late breakfast on Shabbat.  After enjoying her meal, one secular Israeli Jewish woman carrying her granddaughter, was drawn to the conference room by the sound of the Arabic worship.  She was amazed and loved what she saw. "What is this?" she asked, "it's so wonderful, are they here every week?". One of the ministry team was able to share with her about Yeshua, the Jewish Messiah, these Arab women knew and loved.

There was so much more that would take too many pages, and weeks after the event, testimonies were coming in from women who had been touched and healed at the conference and had seen breakthrough in their homes.

The weekend ended with a prayer tunnel for all the local women to walk through. The international team prayed and blessed all the Lord had done throughout the weekend as each woman passed through. Many were overwhelmed by the outpouring of love they felt. They soaked it all up like sponges. "We felt so much love." shared one woman. "I can't believe what the lord has done in my heart", shared another lady,  "we have gone to a different level." 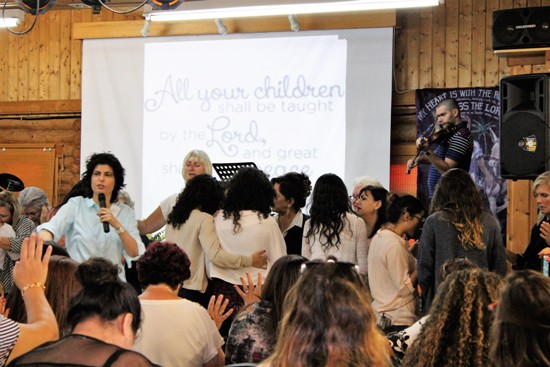 We would like to take this opportunity to thank everyone who invested in sponsoring some of these women to attend the conference.  We know that for them, this conference was life-changing and they were so thankful to be able to attend.

In the words of one of the women:  "Continue on with such conferences that are so important for women. You are doing a great service to every woman who is broken on her inside and this work is not taken for granted.  So, continue because there are many women who are mistreated, abandoned, crushed, filled with bitterness and sadness, pain and ridicule."

And the final word from Rania: "We are so grateful for all of you who are standing with us in relationship, love, prayer, and encouragement. For you to share with us, to witness, and hear the testimonies of the Lord's plans and purposes established in our region is important to us.  The HOPE staff, the local Arab women of the land, and I are so grateful to our global family! Without your relationship, without your prayer support, and generosity, we honestly would not be able to witness His plans nor see the desire of His heart manifest among our women in His land! Thank YOU! Richest Blessings be released for you and your households!!"

"The Lord has done great things in our midst, I believe we have witnessed a historic moment among and for our women in September."

Rania and her team, are busy right now planning a follow-up conference for about 100-110 women from 23 Arab churches that will take place in February. "We believe as Arab women are moving forward with the Lord corporately; possessing the land of our hearts and rising up to know their true identity in Christ," shared Rania, "It's time to get trained and equipped for the battle -to stand as an intercessory power in the land and be positioned with authority, is key."

Immediately after the women's conference, Rania is inviting 100-130 Arab young people from all over Israel for one full day of training, worship and ministry. "The Lord is raising this young generation to rise up as an army of worship and prayer in the land" shared Rania.

We believe these conferences have a life-changing impact in the lives of these Arab woman and youth. This is changing the spiritual atmosphere over the Land of Israel!