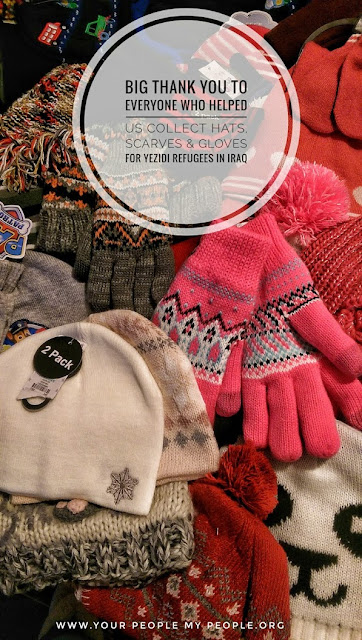 In November, Your People My People hosted Springs of Hope for a meeting in Norfolk (UK) called 'Where Hope Heals'. Our hearts were moved by the passionate message we heard about the plight of the Yezidi people in Kurdistan (Northern Iraq). I don’t believe there was a dry eye in the room as we heard the stories of the young Yezidi women and boys Springs of Hope is helping after they escaped from ISIS. Springs has been working to relieve their suffering and finding creative ways to heal the trauma.

The Yezidi’s have been living in refugee camps for over two years now. Forced to flee their homes as ISIS advanced massacring thousands and enslaving those that were useful to them. Your People My People organised a project to collect hats, scarves and gloves for the refugee children Springs of Hope is working with. We were overwhelmed by the response. Over two full suitcases, were collected and taken directly to the kids that needed them. Snow had already fallen on the mountains around the camps when the gifts arrived and the winter provisions were much appreciated.