When the Lion Roars... 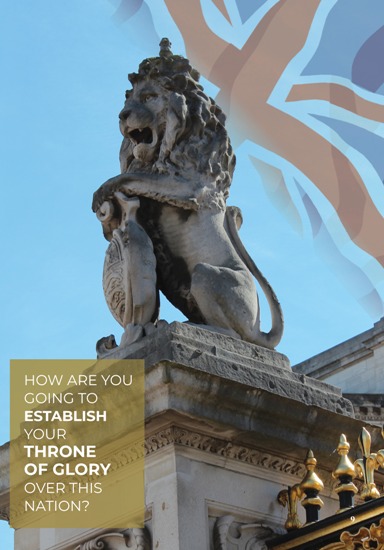 Is it time to rise up? Rania Sayegh, from HOPE: House of Prayer & Exploits in Nazareth, visited the UK last year and spoke this powerful word over the nation.

“Then, the eagle (Wales) began to lift his head, raise up his wings and screech. Then, he took flight, carried on the sound of the roar.

“The man (Scotland) looked like his feet were bound, and when the sound of the roar reached Scotland and touched his feet, it broke the chains. The man was loosed and began to move his feet and dance over the land.

“I felt that as England will arise with its authority as a lion, and release the sound of worship and praise like never before, a new sound would be released in the land. The lion of the tribe of Judah will roar in response over the British Isles and deliverance and victory will manifest in the rising of the identity of these nations, for His throne of glory to be established.

“There is an alignment that is coming over these nations. The sound of the pride of lions will set things on course and in a new order.

“I was excited when I saw this vision. Wow, Lord! I don’t understand it all but I am getting to understand a little bit and I think some of you would have bits and pieces. I put it out there for you because I believe some will have already seen some of the things being confirmed.”

We were so encouraged by this vision Rania shared and wanted to print it for you here, so we can be praying together for the roar of the lion to arise. Feel free to share this vision with others and let us know if it confirms anything the Lord may already have shown you.

Email Post
Labels: House of Prayer and Exploits lion of judah Nazareth Rania Sayegh revival in the UK throne of glory when the lion roars Your People My People YPMP