It's Pentecost, But Not As We Know It! 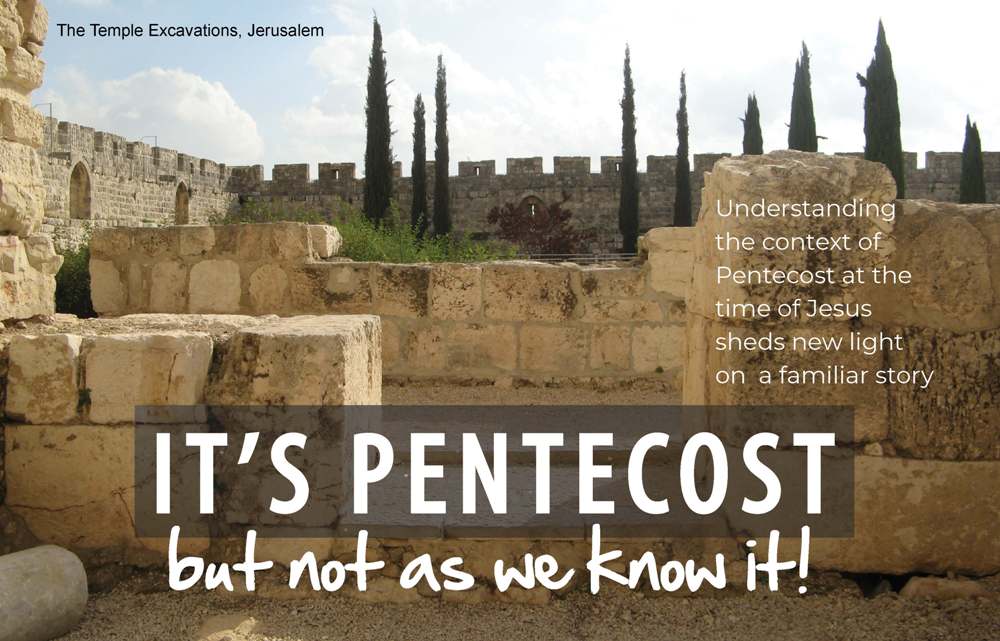 WHAT IS THE DAY OF PENTECOST?

If you were asked, ‘What was the Day of Pentecost? - you would be correct if you said it was the time when the disciples were filled with the Holy Spirit. That was a specific and very important Pentecost, but that’s not the whole story.  The celebration of the Feast of Pentecost had been going on since the time of Moses. Pentecost, or in Hebrew ‘Shavuot’, was a harvest festival directly related to Passover, and also one of the three annual pilgrimage festivals when the people of Israel were commanded to go up to Jerusalem to present offerings at the Temple.

“From the day after the Sabbath, the day you brought the sheaf of the wave offering, count off seven full weeks. Count off fifty days up to the day after the seventh Sabbath, and then present an offering of new grain to the Lord. From wherever you live, bring two loaves made of four pounds of the finest flour, baked with yeast, as a wave offering of first fruits to the Lord.” Leviticus 23:15-17

The Hebrew word ‘Shavuot’ means weeks and refers to the seven weeks whereas the Greek word ‘Pentecost’ focuses on the fifty days. Both words refer to the same Biblical Feast in different languages.

WHERE DID THE DAY OF PENTECOST HAPPEN?

Every year, Jewish pilgrims went up to Jerusalem to celebrate Shavuot/Pentecost. So, there is no question about the fact that the annual feast and the specific moment the disciples were filled with the Holy Spirit, both took place in Jerusalem. The question is whereabouts in Jerusalem? Luke states in the Book of Acts that “They were all together in one place. Suddenly a sound like the blowing of a violent wind came from heaven and filled the whole house where they were sitting.” (Acts 2:2) Traditionally, it has been thought that the disciples were gathered together in a house in Jerusalem, the previous chapter mentions them returning to the upper room of a house where they were staying - maybe even the upper room used for the Passover meal they shared before the crucifixion. It is often assumed the ‘sound like a violent wind’ and ‘tongues of fire’ happened within the confines of this room and the crowd gathered outside this house. Some theologians however, have suggested that the evidence of events that follow, point to the disciples being somewhere much larger than a house in one of Jerusalem’s overcrowded streets. It is possible they were gathered together in the courts of the Temple and that the Pentecost outpouring happened before the eyes of the thousands of Jewish pilgrims in the Temple area as they celebrated the Feast of Shavuot/Pentecost.

The House: Could they really be in the Temple when Luke writes that the sound filled the whole house? In Hebrew there is a tradition of calling the Temple ‘The House’ or the House of the Lord. In fact, Jerusalem was sometimes referred to as ‘Har HaBeit’ (The mountain of the House). So Luke’s use of this word may not have referred to a private home but rather the House of the Lord.

The Disciples and the Feast of Shavuot: Just before he ascended to heaven, Jesus instructed the disciples to remain in Jerusalem.  Luke reports, “While he was blessing them, he left them and was taken up into heaven. Then they worshipped him and returned to Jerusalem with great joy.  And they stayed continually at the temple, praising God.”  Luke 24:51-53. If they were continually at the Temple, praising God, it would make sense that they would be there especially on one of the great Holy Days when hundreds of others had come up to the Temple in Jerusalem to praise God. Other ancient documents describe the Temple mount serving as a centre for the study of the Torah. A colonnaded porch that surrounded the court of the Gentiles was a popular place for teachers to gather with their disciples and could well have been the place the disciples of Jesus were congregated.

The Crowds: Jewish pilgrims from all around the Roman world were in Jerusalem at the time and were amazed to hear the disciples speaking in their own languages. The Bible says that a crowd came together. Peter raised his voice to address them and proclaimed Jesus to be the Messiah. During the Feast of Shavuot, people would be gathered at the Temple so it would be easy for a crowd to witness this spectacle and gather around the disciples. The scenario suggests a public place large enough to hold a huge crowd of people - the Temple would certainly fulfil this criteria.

The Immersions: The Shavuot pilgrims are deeply touched by what they see and hear as Peter leads them through the Hebrew scriptures explaining what just took place. Luke records that those who accepted Peter’s message were baptized (immersed in water) and about three thousand were added to their number that day. Many ritual immersion pools have been excavated around the southern and western sides of the Temple mount. Immersion was not a new concept and these pools (Mikvah/Mikvot in Hebrew), were for the pilgrims to spiritually cleanse themselves before approaching the Temple, the place of God’s presence. Many pools were needed to accommodate the vast crowds who descended on the Temple during the Biblical Feasts. Here, was probably the only place in Jerusalem that could cope with immersing three thousand new believers in one day! 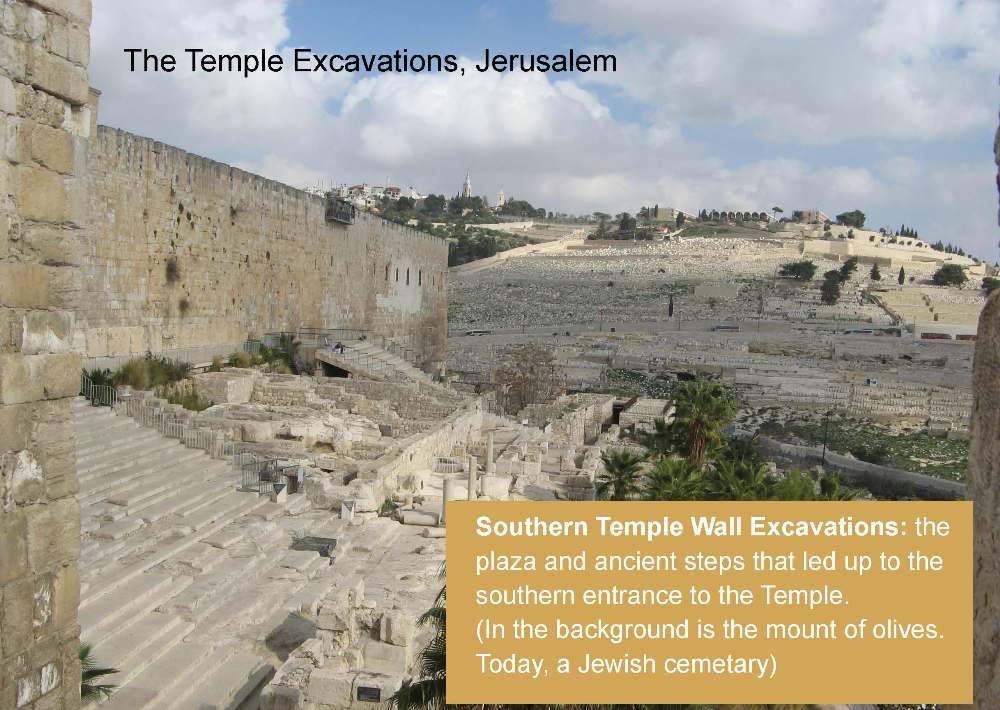 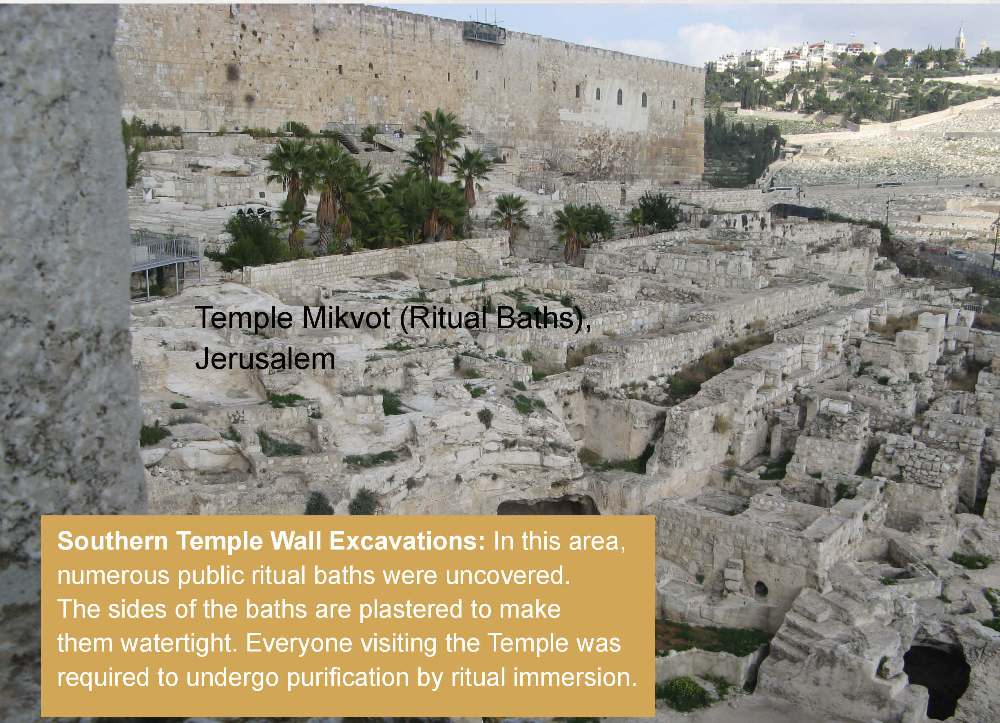 The Bible does not make it clear exactly where this event happened, but it is fitting to think that the outpouring of the Holy Spirit could have taken place within the Holy Temple, the dwelling place of God’s presence.

When Solomon built the first Temple, 1Kings 8:11 says the priests could not minister because God’s presence was so strong.  This time, God’s Holy Spirit filled the living stones, new believers in Yeshua, being built together as a holy temple, a permanent dwelling place for Adonai Elyon, our God Most High!