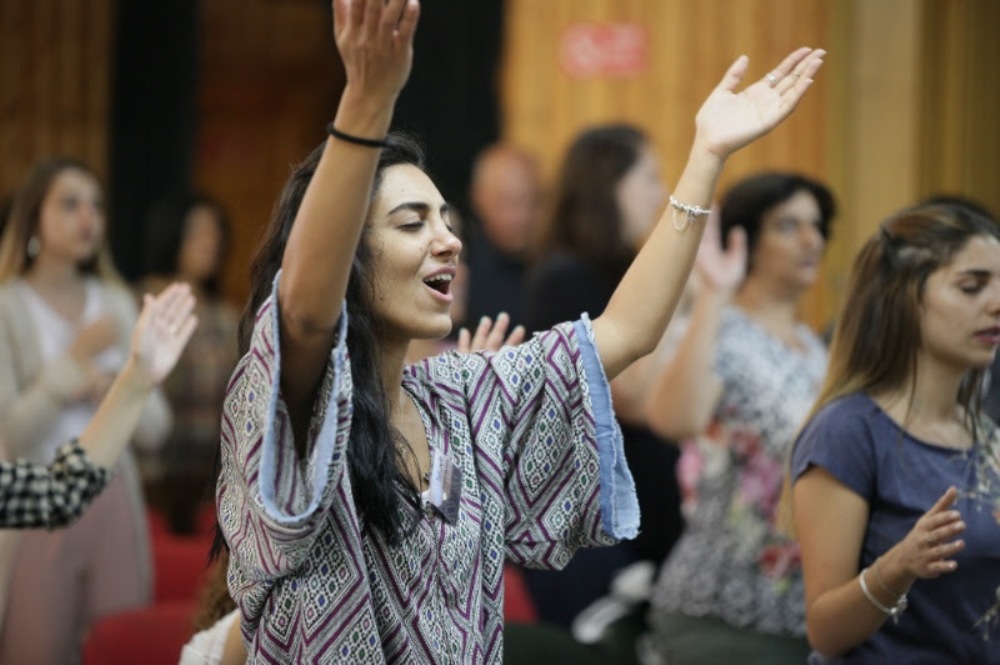 The atmosphere was heavy in the room as over 100 Arab Christian women listened to an Arab Pastor, a father to the community, repent for the oppression the women had experienced at the hands of men. As Pastor Majdy poured out the heart of our Heavenly Father over these beautiful women, describing them as pearls in His hands: precious and honoured, seen and valued - there was a heavy silence.  The pain was so deep, so entrenched after years of being silenced that none of the women knew how to respond to the Pastor's humility. "In the Spirit, we could see a huge wall that seemed almost impossible to break," shared Rania Sayegh one of the organisers, "This wall represented the burden of many, many years of pain.  It looked like Pastor Majdy was pounding that big wall, but it was not coming down in the hearts of the wounded women. We were calling to the Lord for breakthrough!"

After what seemed like an age, as the Pastor continued to pour out his heart, four 'mothers' of the community were invited forward. In a powerful act of humility, Pastor Majdy got down on his knees before the 'mothers' and began to wash their feet. "In this moment, the heavens opened, and the wall was shattered!", continued Rania,  "This act of humility and lowliness, the man’s face literally on the floor, broke open the heavens and released a powerful breakthrough!"

As her feet were being washed, one of the mothers began wailing - the atmosphere suddenly shifted in the room and many women began to weep and wail. Alongside Pastor Majdy stood three other men: an Arab church leader, a Messianic Jew and another representing the nations. Together they asked for forgiveness on behalf of leaders in the church for silencing the voices of the women. The Arab leader began declaring freedom for them to be positioned back in their rightful place and identity in the church. "The Lord was opening a deep ancient well of healing and began to heal the daughters of the land," said Rania. 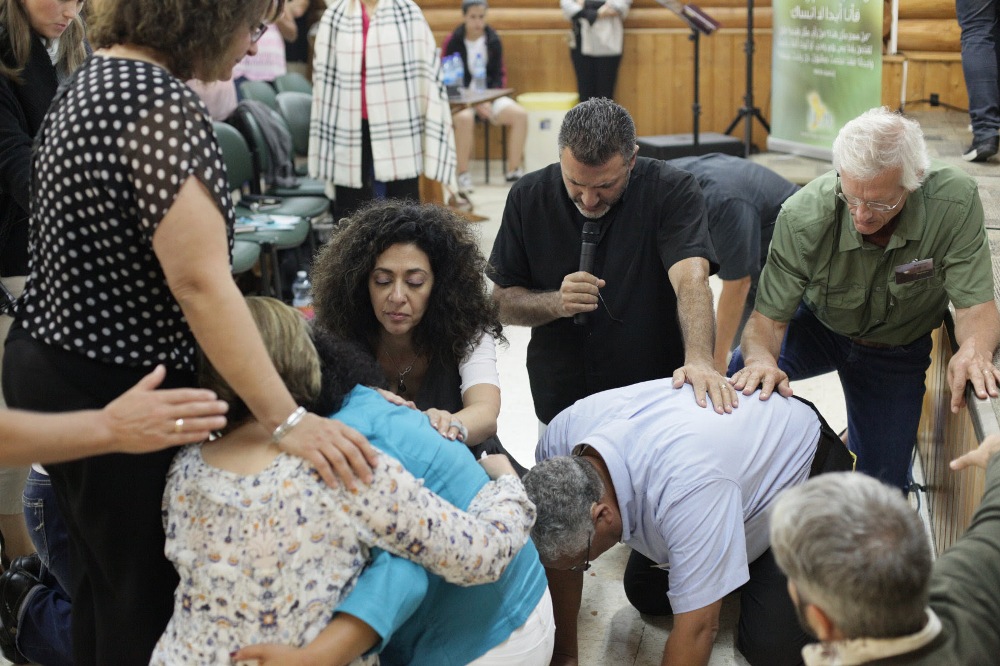 In traditional Arab culture, that is heavily influenced by Islam, women are subjected to verbal and emotional abuse, often from birth. Their voices are silenced. In the male dominated society, the birth of a son is celebrated with much joy by the whole community but neighbours will mourn with the family that gives birth to a girl. Despite wonderful exceptions, this thinking has also affected the church. After years of oppression, some of the women had hardened their hearts against men and left an opening for a spirit of hatred to grip their hearts. The organisers of the last 'Arab Deborah Arising' conference believed the Lord was asking them to address this and release freedom from hatred, and healing to the women.

"What spoke to me most was talking about forgiveness towards all men in my life," shared one of the attendees, "Something very important happened to me at the conference which touched my heart. I cried out powerfully and cried with sadness and pain. With a lot of physical pain in my body which I strongly felt, then it was gone. When I went to the next meeting and we talked more about forgiveness - I realised and made personal the things I experienced. It was then that I felt true release of those who have hurt me in my life and the Lord put love and forgiveness in my heart towards them and I forgave them. I asked the Lord for healing for myself and today I am in a different place.  I love them, I release them and bless them. And I thank the Lord for everything I went through in my life."

The first "Arab Deborah Arising" conference back in 20?? explored the story of Deborah and her role as a woman and a judge in ancient Israel. The Lord highlighted that Deborah identified herself in Judges 5:7 not as a judge or a warrior but as a mother in Israel. She rose up to make the villages and highways safe again. As women arise and take their place as spiritual mothers in the Land... they herald safety and peace. The theme of motherhood was also highlighted in the most recent conference. Before the event, two intercessors received the same dream in which a busy woman gave birth to a baby girl. The new mother was very busy and distracted by many things. She kept putting off feeding her new little girl which caused the baby to die. Overcome with grief and desperation, the woman cried out to God  while holding her lifeless baby girl. The mother suddenly had the idea to hold her baby girl to her breast, and even though she was gone, she tried to feed her. As the milk began to flow, the baby girl came back to life and the woman was overjoyed. 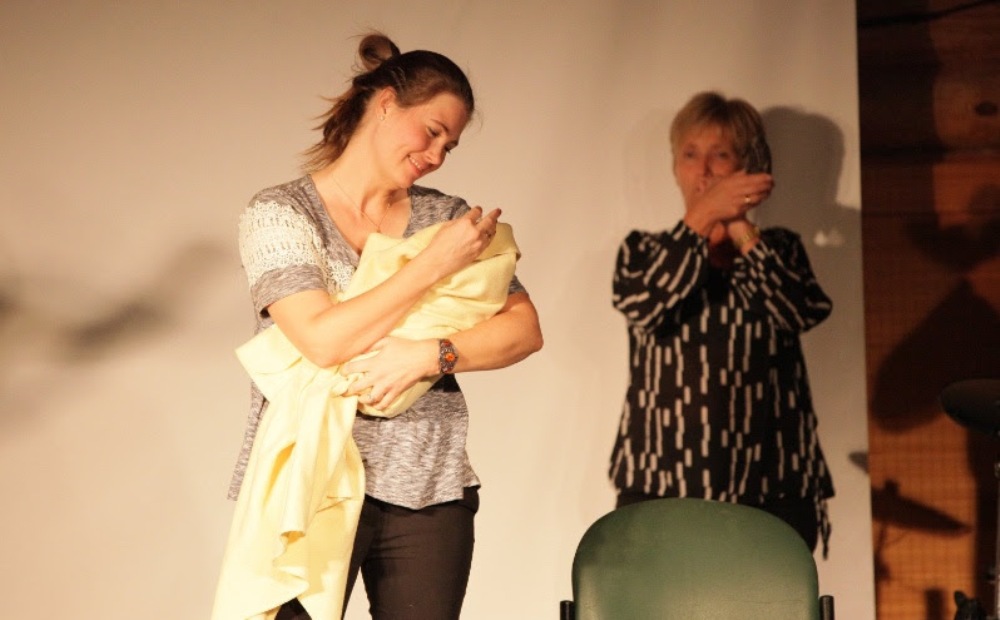 At the beginning of the conference, one of the women acted out the dream using drama. The imagery was so powerful many of the women were touched. The theme of mother's rising up to care for and nurture the things the Lord was speaking over the Arab women of Israel permeated the conference.

At the same time the dream had been released, the Israeli press ran a heartwarming story about a Jewish nurse who breastfed the baby of a Palestinian Muslim woman who was in the hospital, too ill to do it herself. (Press article: Israeli Nurse Breastfed Palestinian Baby) The Muslim community shared that when a woman breastfeeds another mother's baby, it is as if she adopts the baby as her own. The organizers of the conference felt the Lord was reminding them about the spirit of adoption and motherhood that were themes for the conference. It was also a powerful picture of Jewish and Arab mothers working together to keep the baby alive. As God releases his plans and purposes over the women of Israel, both Jewish and Arab mothers are arising to nurture and pray for His Kingdom to be released over the nation. 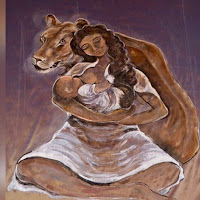 Deborah Robertson from Ireland inspired by the vision of the conference, painted a beautiful banner depicting the nursing mother being protected by a lioness. As the women are released into freedom and healing, they are like spiritual lionesses watching over the promises of God to see his Kingdom birthed and nurtured in Israel.

There was such a powerful work of the Holy Spirit at this conference that some of the Jewish Believers who attended declared that they needed to organise a similar gathering to minister to the Jewish Messianic women.  The vision birthed by the Arab mothers was carried by the Jewish mothers to release healing and freedom to the Messianic Jewish women too.

God is doing a powerful work among the women of Israel. Amanda from Your People My People was at this 'Arab Deborah Arising' conference and having supported this ministry for many years, we encourage you to add your prayers to ours to see the Arab and Jewish women arise into their full destiny, to bring life, nurture and safety to the Land!