Another group of students graduated from the 3-month discipleship program run by LECH L’CHA.

The leaders of the program shared, “As a team, we had the huge joy of witnessing the way that God worked in the hearts of each and every one of them and also the way that as a group, they were a blessing to one another... there was a clear desire in each one of the participants to walk closer with Yeshua." 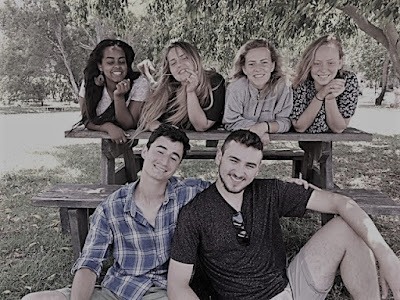 There were four girls and two boys. Together, this small but diverse group went through three months of studying God's word, developing personal time with the Lord, personal mentoring, hikes to Biblical sites, visits to each other's congregations, volunteering, and a mission trip to Zimbabwe.

Five graduates from the previous program came back to help and were able to continue to grow in their walk with the Lord as they served. "We were so impressed by the way they that they dealt with challenges, each one functioning in the particular role they had been given, ploughing into the lives of the participants and were a personal example," shared Lech L'cha.

The next 3-month program will begin in January with a brand new bunch of students. In the meantime,  the LECH L’CHA team has been busy preparing for a Young Adult conference they are running this autumn called ‘Being an Ambassador for the Messiah’. Last year, they had 170 attendees and they are praying that this year’s conference will also be a blessing to many.

This autumn, they will also be trialling a shorter 3-week discipleship course to encourage those who are unable to dedicate a full 3 months to come and grow in their relationship with Yeshua (Jesus). It will also be open to previous graduates to build on the foundation they received in the 3-month program.

PRAY:  For the young people who just graduated | For the upcoming conferences, planned short program and the next 3-month course | For all staff and students of LECH L’CHA