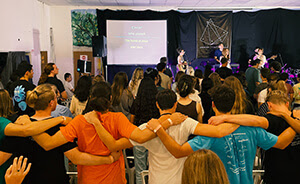 At the end of June,  230 Jewish and Arab youth took part in the Dor Haba Summer Camp. Four days of meeting with the Lord and with each other.

“We witnessed His love, healing, forgiveness, unity, and creativity break out in our hearts and lives once again.” shared Tal, the Director of Dor Haba.

During the camp the teenagers took part in various creative workshops in addition to spending time worshipping and praying and of course breaking down barriers and becoming friends across cultural and political divides.

In the music workshops, teenagers prepared to lead worship and prophetic intercession for the whole gathering. It was amazing to see 14, 15, 16 year olds taking the lead in bringing their peers into the presence of God each meeting.

The youth attending the dance, drama and film workshops worked together on a music video to the song, “Awake My Soul”. They came up with the storyline and ideas themselves and were excited to produce something together, as young Jewish and Arab Believers, that shared about their faith and hope in Jesus.

On the third day, everyone went out onto the streets of the city of Netanya for an outreach. The art students who had been making original jewellery and writing scriptures to go along with each piece, went “treasure hunting”: as they walked around they asked the Lord who to give the jewellery to. This led to many conversations with people on the board-walk about their faith and the unity that Jesus brings between them.

Those who did the dance workshops  performed  in several places along the promenade by the beach and those who had been working on music also played and sang worship songs in various locations. Many Israelis stopped to listen and even joined in. One local resident commented that they, “brought life back to the board-walk” and one of the worship teams were even invited to play in a cafe.

After the outreach, all 200 or so teenagers ,with the helpers and leaders, returned to the camp venue to share their experiences. There were so many encouraging testimonies and this led into a powerful time of worship.

At the end of the meeting the host on stage said there was time for one last testimony. A 16 year old girl came up to the microphone and shared how she had been severely depressed for two years, and had almost taken her life the day before the camp started, but she decided to go to the camp and give God and life, “one last chance.” She ended up giving her life 100% to Yeshua (Jesus) and getting filled with the Holy Spirit. She was glowing and had such a huge smile on her face, a genuine smile that her friends had never seen before. 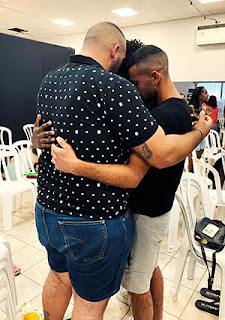 Her testimony led to 23 others coming up one by one, confessing that they too have struggled with suicidal thoughts, depression and anxiety. The whole room began sobbing quietly and turning to each other to receive prayer. Many were set free - it was a powerful time.

“You could sense the power of death just breaking in the whole room,” shared Tal, “as young people began giving their fears and hopelessness to the Lord and repenting. Then, one by one, they began coming up to the mic (over 35 youth), praying and interceding for salvation and healing in their generation.” 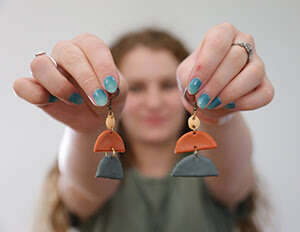 We pray that these teens will continue to push deeper into the Lord and that the friendships they built with each other will be an encouragement now they are back in their own homes and congregations.

For the first time, Dor Haba also ran a camp for 18-24 year olds. This group was mainly Israeli soldiers and Arab-Israeli university students. There was also a group of Palestinian Arabs from Bethlehem.

They were from very different backgrounds, some from very conservative congregations where they had never experienced the joy or moving of the Holy Spirit in worship - the only common factor was their faith in Jesus.

There was a palatable tension in the room during the first meeting, as Palestinian Believers met Israeli soldiers who followed Yeshua, for the first time as well as Jewish Believers who had never met Palestinian Arab Believers.

There was one young man who came with the group from Bethlehem, a big guy with tattoos, who had grown up in an Orthodox Christian home but did not have a personal relationship with the Lord and had spent his teenage years clubbing, partying  and doing drugs. He had recently reconnected with some childhood Christian friends who invited him to the Dor Haba camp. He was in for a shock on several levels!

He was horrified to see Israeli soldiers with guns in the first worship service (while doing National Service, soldiers have to carry their guns with them even when off-duty). He almost walked out but his friends convinced him to stay. By the third meeting, the Lord had really broken through in the worship times and he was praying with everyone else, with his arms linked with his Jewish brothers in the Faith.

He surrendered to the prompting of the Holy Spirit and asked Jesus to be Lord of His life. He was completely transformed by the end of the camp. On the last day, he was baptised with two others in a swimming pool next to the camp venue. The pool area was packed with local Israeli families from the nearby neighbourhood and they were very interested to find out what was going on. One curious lifeguard heard the Gospel four times from different people.

Tal said, “We had many creative workshops planned for this camp, but the worship services kept going way longer than planned, as God began moving more and more and people were receiving prayer and breakthrough in their lives.
“During one meeting, a 22-year-old Jewish guy shared how his dad left him and his family when he was young and it left a big hole in his heart. He started praying and weeping into the mic that God would fill that hole in his life, and that God would reveal His father-heart to everyone there. Many began crying and praying over each other.
“In the late evenings we had an open mic and bonfires and that led to a lot of conversations about the Lord. We, as leaders, were so impressed by the openness and hunger of all the young adults there.
“I believe it’s because of that genuine hunger that the Holy Spirit came in such a powerful way each meeting. It was definitely a time of healing and refreshing for everyone there, including the leaders.
“We worshipped in Hebrew and Arabic, and some of the young adults there even wrote, recorded, and filmed some new worship songs!
“Please pray that God will continue what He started in each heart, and that each one would draw closer and closer to Him. Pray that they would receive fresh grace for whatever situation and reality they face after the camp, whether it’s living and working in the West Bank, studying in university, or serving in the Israeli army.
“Pray that Yeshua would continue to meet them where they’re at, and that they would be a light to those around them.”
Yes and Amen!

If your heart is moved to support the work the Lord is doing among Israeli Jewish and Arab and Palestinian young people - you can partner with this work here: https://www.yourpeoplemypeople.org/p/gdop-2011.html